Items related to Coming Home: A Soldier Returns from Korea 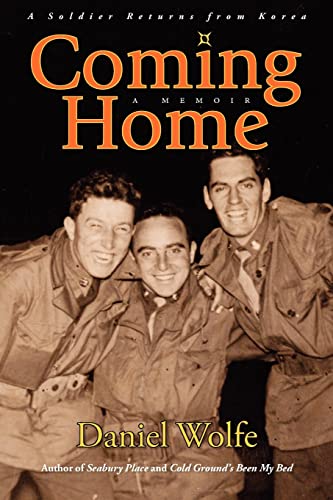 Daniel Wolfe traces the sometimes humorous, sometimes horrifying, and frequently poignant travails of a young Korean War vet returning to the Bronx to begin “the rest of the story.” Veterans and their loved ones will relate to the respect and understanding with which Wolfe depicts his former buddies on the front line. His take on the psychological toll of warfare offers perspective and hope for light at the end of the tunnel. Short chapters recount young Danny’s discovery that he qualifies for college under the GI Bill; his adventures as a high school biology teacher in the Bronx; his courtship of his wife, life with three children in suburbia, the couple’s migration as “snowbirds” to Florida, a subsequent move to North Carolina, and finally a return to New York. An army reunion 45 years after his discharge led Dan to recollect long-suppressed Korean War experiences, learn the ends of some dramatic episodes, and receive a long-overdue medal. Wolfe’s gift for tragicomedy shines as he recalls characters encountered in a life well lived: Sam, the mentally challenged bowling alley clerk, paints extraordinary pictures on the cardboard sheets that line boxes of corn muffins; Adrian, a lighting salesman with a decorator’s flair, suddenly bursts out speaking in tongues over dinner; and macabre Louis Saint Louis uses his blood as a metaphor in his artworks. With a few deft strokes, Wolfe captures the essence of these and other characters in their beautiful and bewildering humanity. Readers who seek a good story, a good laugh, and a good man need look no further. Dan Wolfe, former off-the-curb champ, hits the ball right out of the park.

Daniel Wolfe, born in the Bronx, attended P.S. 61, Hermann Ridder Junior High, and James Monroe High School. After graduation and brief work stints, he was drafted into the Korean War and earned a Bronze Star with a “V” for Valor. After his discharge, he graduated from CCNY, raised a family, and taught high school for thirty-five years before retiring. This is his third memoir.

If you are a consumer you can cancel the contract in accord...