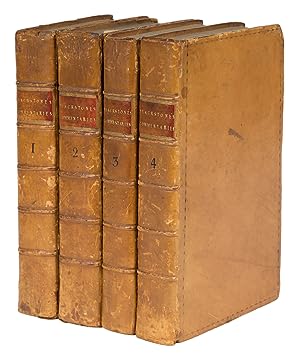 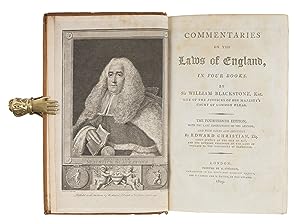 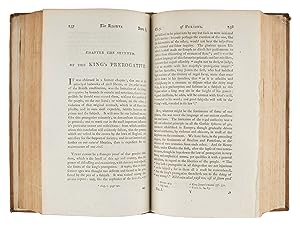 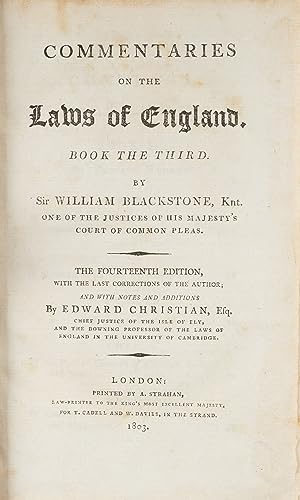 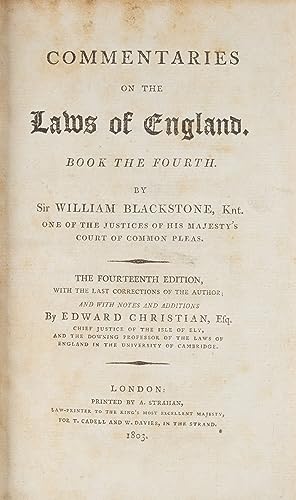 Commentaries on the Laws of England, In Four Books. 14th ed

Eller 26; London, 1803. 4 Vols. Blackstone's Commentaries, Eller 26/Laeuchli 33 Blackstone, Sir William [1723-1780]. Christian, Sir Edward [d. 1823], Editor. Commentaries on the Laws of England, In Four Books. With the Last Corrections of the Author: And with Notes and Additions. London: Printed by A. Strahan for T. Cadell and W. Davies, 1803. Four volumes. Copperplate frontispiece portrait, table of consanguinity, folding table of descents. Octavo (8-1/2" x 5-1/2"). Contemporary polished calf, blind fillets to boards, raised bands and lettering pieces to spines. Moderate rubbing to spines and extremities, corners bumped, joints starting (or just starting), some hinges cracked, rear board of Volume 2 beginning to separate but still quite secure, contemporary copperplate armorial bookplate (of John Monins) to front pastedown. Light toning to text, negligible foxing in a few places in each volume, interiors otherwise clean. A nice set. $1,000. * Fourteenth edition. Paging irregular, following Blackstone's paging in margin. "Since the publication of the thirteenth edition, 1800, Christian had become Chief Justice of the Isle of Ely, and the Downing professor of the laws of England in the University of Cambridge. These titles appear on title pages of this fourteenth edition, in which his notes are printed as footnotes": Eller, The William Blackstone Collection in the Yale Law Library 26. Laeuchli, A Bibliographical Catalog of William Blackstone 33. Seller Inventory # 59231

Title: Commentaries on the Laws of England, In Four...

The Lawbook Exchange, Ltd. specializes in all aspects of law and legal history. Our publication program offers reprints of over 800 landmark works as well as original books. We invite offers of antiquarian, scholarly and current practice materials. Founded in 1983, we currently serve thousands of individuals and institutions worldwide. Law books - Out of print, Scholarly, Rare, and Reprints of Legal Classics. We also handle secondhand primary and secondary source material for practicing lawyers. Generally someone is available Monday-Friday 9:00 - 6:00PM(Eastern Time). Member of the Antiquarian Booksellers Association of America and the International League of Antiquarian Booksellers.


All items are offered subject to prior sale. All prices are net. Appropriate sales tax will be added for residents of New Jersey. Foreign remittances must be in U.S. dollars, by check drawn on a U.S. bank, by international money order, or by wire transfer. We accept Visa, MasterCard, and American Express credit cards.