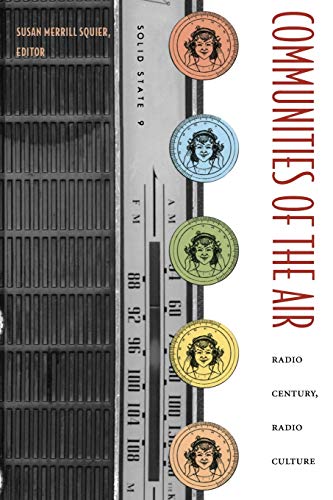 Synopsis: A pioneering analysis of radio as both a cultural and material production, Communities of the Air explores radio’s powerful role in shaping Anglo-American culture and society since the early twentieth century. Scholars and radio writers, producers, and critics look at the many ways radio generates multiple communities over the air—from elite to popular, dominant to resistant, canonical to transgressive. The contributors approach radio not only in its own right, but also as a set of practices—both technological and social—illuminating broader issues such as race relations, gender politics, and the construction of regional and national identities.

Drawing on the perspectives of literary and cultural studies, science studies and feminist theory, radio history, and the new field of radio studies, these essays consider the development of radio as technology: how it was modeled on the telephone, early conflicts between for-profit and public uses of radio, and amateur radio (HAMS), local programming, and low-power radio. Some pieces discuss how radio gives voice to different cultural groups, focusing on the BBC and poetry programming in the West Indies, black radio, the history of alternative radio since the 1970s, and science and contemporary arts programming. Others look at radio’s influence on gender (and gender’s influence on radio) through examinations of Queen Elizabeth’s broadcasts, Gracie Allen’s comedy, and programming geared toward women. Together the contributors demonstrate how attention to the variety of ways radio is used and understood reveals the dynamic emergence and transformation of communities within the larger society.

From the Back Cover: ""Communities of the Air "covers historical periods, genres, performers, program types, and audiences not previously discussed in this still all too thin area of radio studies."--Susan Jeanne Douglas, author of "Listening In: Radio and the American Imagination"

Book Description Duke University Press, 2003. Paperback. Condition: Good. Good condition is defined as: a copy that has been read but remains in clean condition. All of the pages are intact and the cover is intact and the spine may show signs of wear. The book may have minor markings which are not specifically mentioned. Most items will be dispatched the same or the next working day. Seller Inventory # mon0010361860

Book Description Duke University Press, 2003. Condition: Good. Former Library book. Shows some signs of wear, and may have some markings on the inside. Seller Inventory # GRP95727709

Book Description Duke University Press Books, 2003. Condition: Good. A+ Customer service! Satisfaction Guaranteed! Book is in Used-Good condition. Pages and cover are clean and intact. Used items may not include supplementary materials such as CDs or access codes. May show signs of minor shelf wear and contain limited notes and highlighting. Seller Inventory # 0822330954-2-4