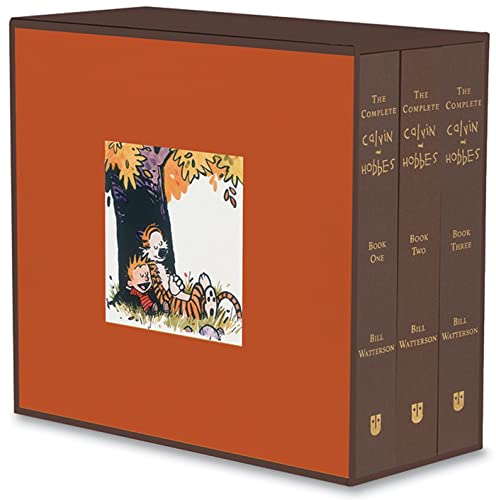 Synopsis: Join Calvin and Hobbes on all their adventures in this three-volume collection of every comic strip from the comic strip’s eleven year history (1985 to1996).

"Ive loved comic strips as long as I can remember. As a kid, I knew I wanted to be either a cartoonist or an astronaut. The latter was never much of a possibility, as I dont even like riding in elevators. I kept my options open until seventh grade, but when I stopped understanding math and science, my choice was made. There is great personal satisfaction in attending to detail and quality, and I remain very proud of the standards the strip met day after day. I also liked the responsibility of knowing that, succeed or fail, it was all my own doing. This approach kept the strip very honest and personal--everything having to do with Calvin and Hobbes expressed my own ideas, my own values, my own way. I wrote every word, drew every line, and painted every color. Its a rare gift to find such fulfilling work and I tried to show my appreciation by giving the strip everything I had to offer."

Exclusive Images from the New Collection

More Calvin and Hobbes Books
"About this title" may belong to another edition of this title.

5. The Complete Calvin and Hobbes

There are 25 more copies of this book