Items related to The Complete Lyrics of Alan Jay Lerner 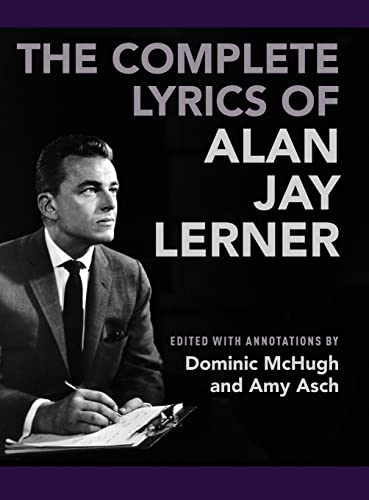 Alan Jay Lerner wrote the lyrics for some of the most beloved musicals in Broadway and Hollywood history. Most notably, with composer Frederick Loewe he created enduring hits such as My Fair Lady, Gigi, Camelot, and Brigadoon. In The Complete Lyrics of Alan Jay Lerner, editors and annotators Dominic McHugh and Amy Asch bring all of Lerner's lyrics together for the first time, including numerous draft or alternate versions and songs cut from the shows. Compiled from dozens of archival collections, this invaluable resource and authoritative reference includes both Lerner's classic works and numerous discoveries, including his unproduced MGM movie Huckleberry Finn, selections from his college musicals, and lyrics from three different versions of Paint Your Wagon. This collection also includes extensive material from Lerner's two most ambitious musicals: Love Life, to music by Kurt Weill, and 1600 Pennsylvania Avenue, which Lerner wrote with Leonard Bernstein.

Dominic McHugh is Senior Lecturer in Musicology and Director of Performance at the University of Sheffield. His publications include the books Loverly: The Life and Times of My Fair Lady and Alan Jay Lerner: A Lyricist's Letters. He regularly appears on BBC TV and radio and has acted as a consultant to the Sydney Opera House's production of My Fair Lady, directed by Julie Andrews.

Amy Asch is a musical theatre researcher and archivist. She compiled and annotated The Complete Lyrics of Oscar Hammerstein II and has done projects for the estate of Irving Berlin, the estate of Jonathan Larson (Rent), the Rodgers & Hammerstein Organization, and the Library of Congress. She is a longtime employee of Playbill and lives in New York.