Items related to The Complete Ninja: The Secret World Revealed 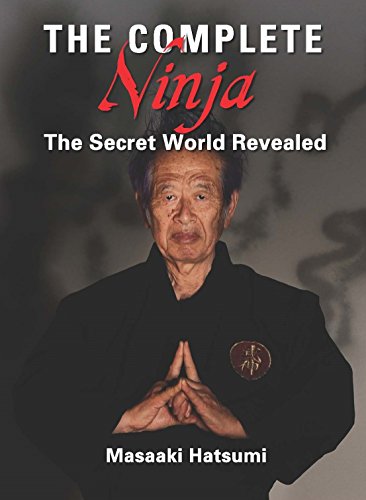 NEW YORK TIMES BESTSELLER!
The ninja were the true embodiment of budo, the warrior spirit. Rather than using techniques of assassination to protect themselves, ninja relied on their senses, and on an acute awareness of their natural surroundings, In fact, ninja avoided unnecessary conflict, and used weapons such as knives and swords only as a last resort. These are the true techniques of ninjutsu, and the art in which the ninja unrelentingly trained.
In The Complete Ninja: The Secret World Revealed, Masaaki Hatsumi, the world’s most renowned ninja grandmaster and top budo master, creates a companion volume to his bestselling The Way of the Ninja. Like the earlier work, The Complete Ninja features hundreds of historical illustrations, documents, and photos (including many of the author demonstrating techniques) to explore the essence and wisdom of ninjutsu and reveal its hidden truths.
The Complete Ninja will help readers sharpen their perceptions and deepen their understanding of two core principles: that ninjutsu is the very backbone of the martial arts, and that it clarifies their essential spiritual significance. Since budo transcends any one particular martial tradition, all practitioners, whether they study judo, aikido, karate, kendo, kenjutsu, jujutsu, or other combative sports, will find the book fascinating and enlightening.

After progressing through various martial arts, Masaaki Hatsumi found his life’s mentor, Takamatsu Toshitsugu, and studied under him for the next fifteen years. Hatsumi became the 34th Grandmaster of Togakure-ry? Ninjutsu and eight other arts, which he unified into the Bujinkan system. While traveling the world, teaching thousands of individual students as well as law enforcement agencies, he received numerous accolades from politicians and spiritual leaders of many nationalities. He has also worked as a professional osteopath, acted in a popular television series, written many books on ninjutsu and budo, and was, for many years, the Chairman of the International Department of the Japan Literary Artists’ Club.