Items related to Confederate Generals in the Western Theater, Volume... 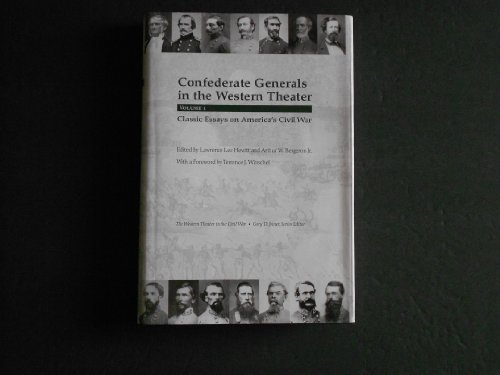 “A marvelous collection of little-known essays by some of the field’s best historians, past and present. It is not only a wonderful assortment in and of itself, but also serves as a fitting prelude to future volumes of modern essays on the neglected Confederate generals of the western theater.”
—Timothy B. Smith, author of A Chickamauga Memorial

“Seldom has a collection of essays contained such a lineup of historians. These are the true ‘power hitters’ of their generation in their prime and at their very best. So prepare to enjoy Civil War historiography at its finest.”
—from the Foreword by Terrence J. Winschel
This collection, the first of several projected volumes, brings together some of the best previously published essays on Confederate commanders in the Western Theater. Including articles by such distinguished historians as Grady McWhiney, Charles P. Roland, T. Harry Williams, Frank E. Vandiver, Archer Jones, and Edwin C. Bearss, many of these pieces have only appeared in academic journals, and most have long been out of print. In resurrecting them, this volume introduces a new generation of readers to some of the mid–twentieth century’s most significant Civil War scholarship.

As part of a new series, The Western Theater in the Civil War, this volume reflects the premise that truly understanding the outcome of the war can only be gained through greater knowledge of the western campaigns and the generals who waged them. The essays gathered here—such as Roland’s reassessment of Albert Sidney Johnston, Williams’s examination of P. G. T. Beauregard’s role at Shiloh, Bearss’s look at Bedford Forrest’s great tactical victory at Brice’s Cross Roads, and Vandiver’s analysis of John Bell Hood’s use of logistics—are admirable contributions to this goal. Significantly, in addition to highlighting the Western Theater’s best-known generals, this volume also includes essays on two of its less familiar ones, Patton Anderson and Daniel C. Govan, thus rescuing these fascinating figures from undeserved oblivion.

Future volumes of Confederate Generals in the Western Theater will showcase the latest scholarship with new essays written expressly for the series. By gathering classic earlier work between one set of covers, this opening foray sets a high standard indeed.

Lawrence Lee Hewitt is professor of history emeritus at Southeastern Louisiana University. A recipient of SLU’s President’s Award for Excellence in Research and the Charles L. Dufour Award for outstanding achievements in preserving the heritage of the American Civil War, he is a former managing editor of North & South. His publications include Port Hudson: Confederate Bastion on the Mississippi.

Arthur W. Bergeron Jr. is a reference historian with the United States Army Military History Institute and a past president of the Louisiana Historical Association. Among his earlier books are Confederate Mobile and A Thrilling Narrative: The Memoir of a Southern Unionist.