Items related to In Conflict: Iraq War Veterans Speak Out on Duty, Loss... 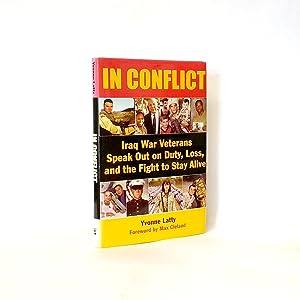 In Conflict: Iraq War Veterans Speak Out on Duty, Loss and the Fight to Stay Alive

Quantity: 1
View all  copies of this book
Buy Used
Price: US$ 11.75 Convert Currency
Shipping: US$ 17.06 From Ireland to U.S.A. Destination, rates & speeds
Add to basket

Book itself is as new. Sunning on spine of dust jacket. Seller Inventory # TSB1784

Title: In Conflict: Iraq War Veterans Speak Out on ...

"In Conflict takes a rare look at the Iraqi War through the words of those who have fought it. The book features more than two dozen veterans from all military branches, from fighter pilots, nurses, medics, and foot soldiers to prison guards, POWs, and reservists, each accompanied by a compelling photograph. Together they comprise a group portrait of American men and women located all over the country and from all age, race, and socioeconomic groups -- men and women whose voices, surprisingly, are rarely heard in the din of discussion on this endlessly analyzed subject. They speak from veterans' hospitals, homes, army bases, and homeless shelters. While their viewpoints are as diverse as their backgrounds -- some supportive, some opposing, some simply confused -- "In Conflict captures one thing these eloquent commentators share: all have been irrevocably changed by their experience.

Yvonne Latty is a native of New York City. She earned a B.F.A. in film/television and an M.A. in journalism from New York University before becoming a reporter for the "Philadelphia Daily News" and an adjunct professor of journalism at Villanova University. She lives in Philadelphia, Pennsylvania.

Cleland is a U.S. Senator for Georgia.