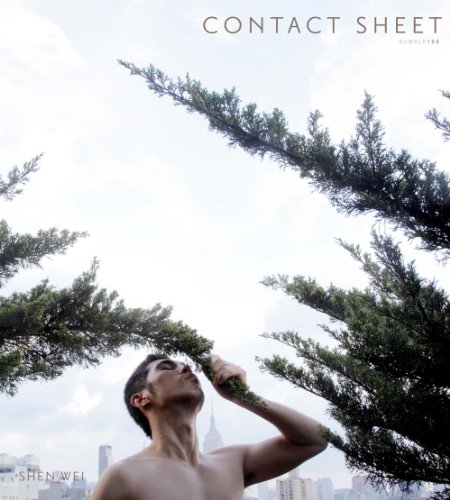 Synopsis: Chinese artist Shen Wei uses his self-portrait series I Miss You Already as a place for self-discovery and contemplation. Each image captures a momentary experience that describes the coming together of person and place. Many of the photographs are intensely sexual. His images invite others into his solitude by quietly beckoning or openly drawing the viewer in. They tease the camera, and therefore the viewer, in various degrees. That Wei is an attractive and physically fit young Asian man plays an important part in how his work addresses desire in the context of identity and bridges cultural and sexual barriers. His overtly sexual photographs push against the boundaries of Wei's conservative Chinese upbringing, which occurred at a time when even art students did not get to study the nude body and would learn to draw the body from sculptural busts. Moving to the United States in 2000, Wei was confronted with very different societal attitudes toward the naked body and sexuality, and his response to these issues has become central to his work. It is not important to Wei that his photographs be understood in only one way, and he acknowledges that his work may be interpreted differently from country to country. He has also seen a shifting of social norms. Even in China it is now increasingly acceptable to depict the naked body, especially in art. Wei uses his series to push against cultural boundaries, but in image after image he also explores his own comfort level with expressing his sexuality. Throughout the series we observe Wei trying on one environment and identity at a time. Although the images are constructed, the emotions are authentic. We see a young man asserting himself in front of the camera and claiming his right to define himself and his sexuality. This catalogue includes an essay by Hannah Frieser.

About the Author: Shen Wei (b. 1977, Shanghai, China) has exhibited his work internationally at venues such as the Museum of the City of New York and Lincoln Center Avery Fisher Hall in New York, NY; the Philadelphia Museum of Art in Philadelphia, PA; the Harn Museum of Art in Gainesville, FL; and the CAFA Art Museum in Beijing, China. Wei's first monograph, Chinese Sentiment, was published by Charles Lane Press in 2011. His photographs have also been featured in publications such as The NewYorker, Aperture, ARTnews, PDN, American Photo, and Chinese Photography. Wei is the recipient of the Rockefeller Foundation Bellagio Center Artist Residency, the Asian CulturalCouncil Arts & Religion Fellowship, the Griffin Award from the Griffin Museum of Photography, the Urban Artist Initiative New York City Fellowship, the Light Work Artist-in-Residence Program, and more. Wei's work is included in permanent collections of the Museum of Modern Art (MoMA), the Museum of Chinese in America, and Rockefeller Brothers Fund in New York, NY; the J. Paul Getty Museum in Los Angeles, CA; the Philadelphia Museum of Art in Philadelphia, PA; the Museum of Contemporary Photography in Chicago, IL; the Museum of Fine Arts in St. Petersburg, FL; the Florida Museum of Photographic Arts in Tampa, FL; the Kinsey Institute in Bloomington, IN; and the Library of Congress in Washington, DC. Wei holds an MFA in photography, video, and related media from the School of Visual Arts, New York; a BFA in photography from Minneapolis College of Art and Design; and an AA in decorative arts from Shanghai LightIndustry College. He is represented by Daniel Cooney Fine Arts in New York, NY.

Book Description Light Work, 2012. Condition: Good. A+ Customer service! Satisfaction Guaranteed! Book is in Used-Good condition. Pages and cover are clean and intact. Used items may not include supplementary materials such as CDs or access codes. May show signs of minor shelf wear and contain limited notes and highlighting. Seller Inventory # 0935445811-2-4

Book Description Light Work, 2012. Soft cover. Condition: Fine. Book is in fine shape with very slight rubbing to the corners of the front cover but no other issues. Photos available on request. Seller Inventory # 003613