Items related to Contentious Politics in the Middle East: Political... 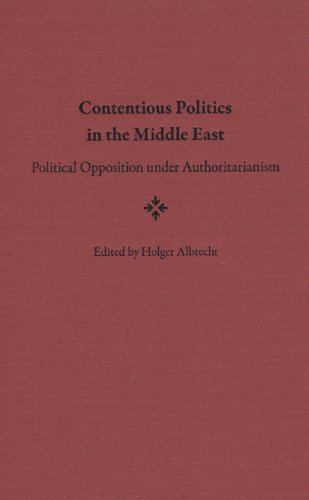 “A fine collection of empirically rich and thoughtful studies on a topic of considerable interest. Its fine-grained analyses of individual countries, organizations, and episodes of regime-opposition interaction make an important contribution to our understanding of authoritarian rule in the Middle East and beyond.”—David Waldner, University of Virginia

“Clearly addresses a gap in the literature on Middle East politics by focusing on various oppositions within different countries of the region. Deepens understanding of the concepts of opposition and contentious politics within authoritarian political systems.”—Nicola Pratt, University of Warwick

Scholarship examining the governments in the Middle East and North Africa rarely focuses on opposition movements, since those countries tend to be ruled by a centralized, often authoritarian government. However, even in an oppressive state, there are civil society and oppositional forces at work. The contributors to Contentious Politics in the Middle East reveal how such forces emerge and are manifested in nondemocratic states across the region.

In most cases, the essays offer a comparative perspective, highlighting similarities across political borders. Providing historical context for current events, they examine the sociopolitical situations in Egypt, Syria, Jordan, Kuwait, Bahrain, Iraq, Morocco, Tunisia, Lebanon, and Algeria and analyze the role of Islam in Arab states’ governments and in the opposition movements to them. They also demonstrate that not all opposition forces propose the overthrow of authority and point out the various forms opposition takes in societies that leave little room for political activism.

The contributors to the volume are drawn from countries across three continents and bring backgrounds in political science, conflict resolution, and history. Challenging the assertion that state-society relations are limited to coercive top-down arrangements in authoritarian regimes, the book will inspire debate on the topic of contentious political participation within the region as well as in similar settings throughout the world.

Holger Albrecht is an assistant professor of political science at the American University in Cairo, Egypt.