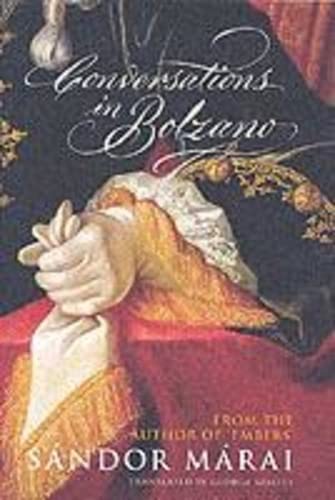 Synopsis: It is midnight, October 31st 1758 and Giacomo Casanova has escaped from a Venetian prison after sixteen months consigned to darkness and the underworld. Shaking off the enforced solitude, Casanova makes his way to Bolzano - the small village where he was dealt a cruel hand. A place full of memories, Bolzano was the scene of a moonlit duel fought with the Duke of Parma when Casanova and he were both in pursuit of the beguiling Francesca. The quest was lost and Casanova was left with three scars above his heart and one option: he could live, but only on the condition he never saw Francesca again. But now Casanova is back having secured a loan from an old friend, and is determined to win this time whilst the Duke has an offer Casanova simply cannot refuse and that just might spell his undoing.

About the Author: Sandor Marai was born in Kassa, in the Austro-Hungarian Empire, in 1900. He rose to fame as one of the leading literary novelists in Hungary in the 1930s. Profoundly anti-fascist, he survived the Second World War, but persecution by the Communists drove him away from the country in 1948, first to Italy and the to the United States. Marai committed suicide in San Diego in 1989, never knowing about the fall of the Berlin Wall and the restoration of democracy to Central Europe. He is the author of over twenty books. Conversations In Bolzano is the second to be translated into English.

Book Description Hardback. Condition: Very Good. The book has been read, but is in excellent condition. Pages are intact and not marred by notes or highlighting. The spine remains undamaged. Seller Inventory # GOR008490381

Book Description Viking, 2004. Hardcover. Condition: Used; Good. **Simply Brit** Shipped with Premium postal service within 24 hours from the UK with impressive delivery time. We have dispatched from our book depository; items of good condition to over ten million satisfied customers worldwide. We are committed to providing you with reliable and efficient service at all times. Seller Inventory # 1882153

Book Description Viking, 2004. Hardcover. Condition: Used; Good. **SHIPPED FROM UK** We believe you will be completely satisfied with our quick and reliable service. All orders are dispatched as swiftly as possible! Buy with confidence!. Seller Inventory # mon0000769364

Book Description Viking, 2004. Hardcover. Condition: Good. Ex-Library Book. Has usual library markings and stamps inside. All orders are dispatched the following working day from our UK warehouse. Established in 2004, we have over 500,000 books in stock. No quibble refund if not completely satisfied. Seller Inventory # mon0003774393

Book Description Viking 04/11/2004, 2004. Hardcover. Condition: Very Good. Shipped within 24 hours from our UK warehouse. Clean, undamaged book with no damage to pages and minimal wear to the cover. Spine still tight, in very good condition. Remember if you are not happy, you are covered by our 100% money back guarantee. Seller Inventory # 6545-9780670915347

Book Description -. Hardcover. Condition: Very Good. Conversations in Bolzano This book is in very good condition and will be shipped within 24 hours of ordering. The cover may have some limited signs of wear but the pages are clean, intact and the spine remains undamaged. This book has clearly been well maintained and looked after thus far. Money back guarantee if you are not satisfied. See all our books here, order more than 1 book and get discounted shipping. Seller Inventory # 7719-9780670915347

Book Description Viking, 2004. Hardcover. Condition: Used; Good. Dispatched, from the UK, within 48 hours of ordering. This book is in good condition but will show signs of previous ownership. Please expect some creasing to the spine and/or minor damage to the cover. Ripped/damaged jacket. The dust jacket of this book is slightly damaged/ripped, however, this does not affect the internal condition. Aged book. Tanned pages and age spots, however, this will not interfere with reading. Grubby book may have mild dirt or some staining, mostly on the edges of pages. Seller Inventory # CHL5001656

Book Description Gardners Books, 2004. Hardcover. Condition: Fair. 0670915343 The book is an ex-library copy and so comes with associated internal/external stamps and marks. The book comes with a dust jacket and a library issue clear plastic jacket over the top. The spine of the dust jacket is faded and has some fading to the edges. Pages are tanned. Pages are intact and not marred by notes or highlighting. The cover and spine have some wear but remain intact. Embossed font to the spine is bright and intact. Seller Inventory # Z0670915343Z4