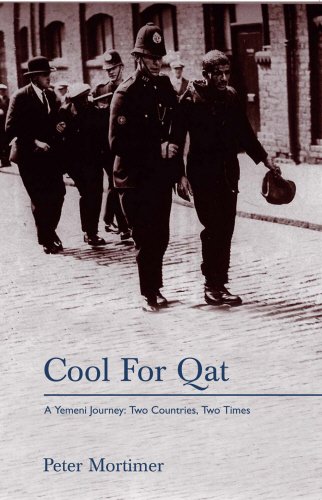 Synopsis: When author Peter Mortimer was commissioned to write a play about the little-known "Arab Riot" between Yemeni and British seamen at the Mill Dam, South Shields, in 1930, he decided to take the long trip to Yemen itself in search of inspiration. Undeterred by post-11 September government warnings, Mortimer set off and found an extraordinary and surprisingly Anglophile country. Cool for Qat documents this journey, during which Mortimer pieces together how the riots of 1930 arose and considers their relevance to the Western attitude towards Muslims today. Back in the UK, Mortimer's investigations into the 1930 riot reveal a society with many striking similarities to current times. Then, as now, Muslim immigrants were treated as scapegoats for all manner of ills, tabloid newspapers drummed up prejudice, and the powers that be often used fear to disguise their own economic failings. Cool for Qat is a thought-provoking, controversial, and often humorous document of one man's travels through a country about which little is known in the West.

About the Author: Peter Mortimer is a poet, playwright and editor who lives in the windy Northumbrian coastal village of Cullercoats. He is the editor of IRON Press and the artistic director of Cloud Nine Theatre Productions.

Book Description Mainstream Publishing, 2005. Paperback. Condition: Used; Good. **Simply Brit** Shipped with Premium postal service within 24 hours from the UK with impressive delivery time. We have dispatched from our book depository; items of good condition to over ten million satisfied customers worldwide. We are committed to providing you with reliable and efficient service at all times. Seller Inventory # 1464116

Book Description Mainstream Publishing, 2005. Paperback. Condition: Used; Good. Personal Inscription on First Page **SHIPPED FROM UK** We believe you will be completely satisfied with our quick and reliable service. All orders are dispatched as swiftly as possible! Buy with confidence!. Seller Inventory # 3766468

Book Description Paperback. Condition: Very Good. The book has been read, but is in excellent condition. Pages are intact and not marred by notes or highlighting. The spine remains undamaged. Seller Inventory # GOR003194103

Book Description Paperback. Condition: Good. The book has been read but remains in clean condition. All pages are intact and the cover is intact. Some minor wear to the spine. Seller Inventory # GOR005779156