Items related to Copenhagenize: The Integral Role of Bicycle Urbanism... 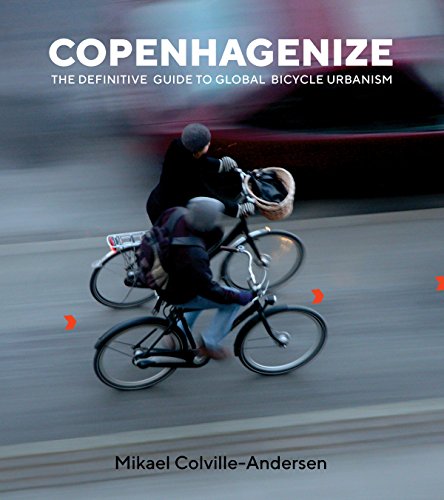 Copenhagenize: The Integral Role of Bicycle Urbanism in the Life-Sized City

The bicycle enjoyed a starring role in urban history over a century ago, but now it is back, stronger than ever. It is the single most important tool for improving our cities. Designing around it is the most efficient way to make our cities life-sized—to scale cities for humans. It is time to cement the bicycle firmly in the urban narrative in US and global cities.

Enter urban designer Mikael Colville-Andersen. He has worked for dozens of global cities on bicycle planning, strategy, infrastructure design, and communication. He is known around the world for his colorful personality and enthusiasm for the role of bike in urban design. In Copenhagenize, he shows cities how to effectively and profitably re-establish the bicycle as a respected, accepted, and feasible form of transportation.

Building on his popular blog of the same name, Copenhagenize offers vivid project descriptions, engaging stories, and best practices, alongside beautiful and informative visuals to show how to make the bicycle an easy, preferred part of everyday urban life.

Copenhagenize will serve as inspiration for everyone working to get the bicycle back into our cities. It will give planners and designers the ammunition to push back against the Automobile Age and convince the skeptics of the value of the life-sized city. This is not a guide on how to become Copenhagen, but how to learn from the successes and failures (yes, failures) of Copenhagen and other cities around the world that are striving to become more livable.

We need to act in order to save our cities—and us—from ourselves. Copenhagenize shows the path forward.

Mikael Colville-Andersen is a Danish-Canadian urban design expert and CEO of Copenhagenize Design Company, which he founded in 2009. He works with cities and governments around the world, designing their bicycle infrastructure and communications and coaching them towards becoming more bicycle friendly. He is a sought-after keynote speaker at design and architecture conferences and events around the world and is the host of the global television series about urbanism, “The Life-Sized City.”