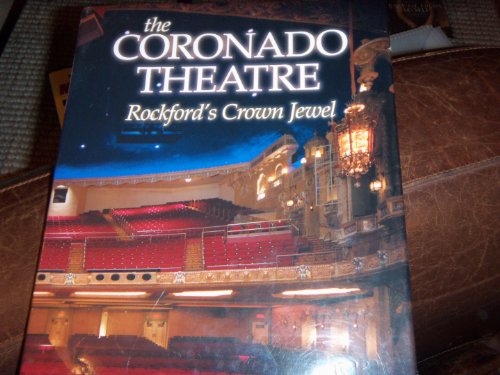 Hint of edge wear to the dj, gently scuffed, lightly shelf worn, some light damage to the outer page edges where some of the pages had stuck together, overall a clean used first edition! Dj is nicely preserved in a brand new protective mylar plastic cover! Very very rare and hard-to-find! 112 historical pages wonderfully illustrated with full-color and black and white photographs! "The dream of Willard Van Matre and the Rockford Enterprises Group, the Coronado Theatre in rockford, Illinois opened its doors in 1927. The ornately decorated coronado was a mammoth undertaking, requiring 18 months to construct and costing roughly $1.5 million. Over the years, the 'Wonder Theatre' hosted show business legends: the Marx Brothers, Tommy Dorsey, Frank sinatra, Louis Armstrong, George Gershwin, Bob Hope, Talullah Bankhead and even Gypsy Rose Lee. orchestras, plays, concerts, silent films, 'talkies,' political rallies and high school graduations all took place on the stage of the Coronado beneath twinkling stars, surrounded by a fanciful Mediterranean landscape. After decades of gala premieres and packed houses, the Coronado Theatre began to show its age. The last movie in the theater was shown in 1984. Local groups continued to use the Coronado to host productions ---- roughly 40 per year ---- but the theater suffered from antiquated restrooms, an unreliable heating system, outdated sound and lighting equipment, and a stage built for vaudeville and movies, not full-scale, modern productions. Also of concern, the building was not fully accessible to all patrons or performers. In 1995, a group of concerned citizens, under the aegis of the Rockford Area Arts Council, began to investigate the possibility of renovating the Coronado to create a state-of-the-art performance and entertainment facility. In 1997, with the gift of the theater to the City of Rockford by the Kerasotes Corporation, the Friends of the Coronado was officially formed. A year later the organization launched a fund-raising campaign to expand, restore and renovate Rockford's 'Wonder Theatre.' With the generous help of the City of Rockford and thousands of corporations, foundations, government and individual donors and volunteers, the dream of creating a world-class venue 'for all to use and share,' has been realized in the 'new' Coronado Theatre. On the occasion of the grand re-opening of the Coronado Theatre, after extensive renovation and expansion, the Friends of the Coronado is pleased to share this history of the 'Wonder Theatre' in Rockford, Illinois." Extremely scarce and out-of-print! Size: 4to - over 9ľ" - 12" tall. Bookseller Inventory # 026492

Publisher: The Friends of the Coronado, Rockford, Illinois