Items related to Cuba, the Elusive Nation: Interpretations of a National... 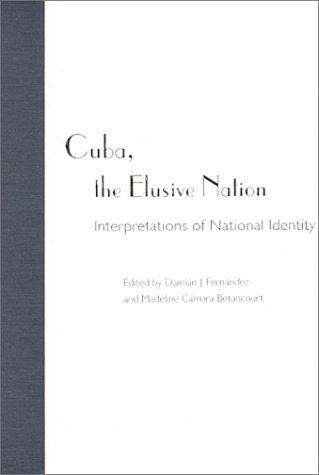 Cuba, the Elusive Nation: Interpretations of a National Identity

"New readings by major exile scholars on the unsettling but weighty question of defining who the Cubans are, what constitutes their national identity, and how they might define themselves as Cubans with respect to their distant island culture. The perspectives presented cover the fields of history, political science, sociology, art, music, literature, anthropology, religion, and gender studies."--Ivan A. Schulman, University of Illinois

This anthology brings together scholars from a variety of disciplines who look at one main question: What constitutes Cuban identity? Encouraged to go beyond received ideas and time-worn methodologies, they offer revisionist perspectives that argue for a "Cubanness" marked more by tension and diversity than by harmony and similarity, more impure than pure, more elastic than static. By examining issues often misrepresented or simply ignored in the past, sources and voices contribute to a fluidity that resonates with the collection's title.

Contents
Interpretations of National Identity, by Damián  J. Fernández  and Madeline Cámara  Betancourt
I. The Nation as Historical Narration
1. Reconstructing Cubanness: Changing Discourses of National Identity on the Island and in the Diaspora during the Twentieth Century, by Jorge Duany
2. Rethinking Tradition and Identity: The Virgin of Charity of El Cobre, by María Elena Díaz
3. Rethinking Race and Nation in Cuba, by Ada Ferrer
II. The Nation as Incomplete Desire
4. Cuba and Lo Cubano, or the Story of Desire and Disenchantment, by Damián J. Fernández
5. Between Myth and Stereotype: The Image of the Mulatta in Cuban Culture in the Nineteenth Century, a Truncated Symbol of Nationality, by Madeline Cámara Betancourt
6. Boleros, Divas, and Identity Models, by José Quiroga
7. Post-Utopia: The Erotics of Power and Cuba's Revolutionary Children, by Ruth Behar
8. Cuban CondemNation of Queer Bodies, by Emilio Bejel
III. The Nation as Metaphor
9. The Nation without a Story, by Antonio Vera-León
10. Bondage in Paradise: Fredrika Bremer's Travels to Cuba and the Inscape of National Identity, by Adriana Méndez Rodenas
11. The Sea, the Sea, Once and Again: Lo Cubano and the Literature of the Novismas, by Nara Araújo
12. Gallery of Cuban Writing, by Rafael Rojas
IV. The National as the Transnational
13. The Musicalia of Twentieth-Century Cuban Popular Musicians, by Raúl Fernández
14.  Lo Blanco-Criollo as Lo Cubano: The Symbolization of a Cuban National Identity in Modernist Painting of the 1940s, by Juan A. Martínez
15.   The Trouble with Collusion: Paradoxes of the Cuban-American Way, by Max J. Castro

Damián J. Fernández is associate professor and chair of the International Relations Department at Florida International University. He is the editor of Cuban Studies since the Revolution (UPF, 1992) and the author of Cuba and the Politics of Passion.

Damian J. Fernandez, professor of international relations and director of the Cuban Research Institute at Florida International University in Miami, is the coeditor of "Cuba, The Elusive Nation: Interpretations of National Identity "(UPF).