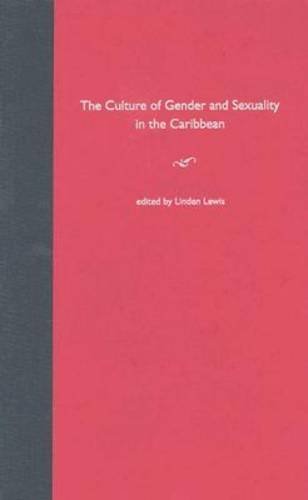 The Culture of Gender and Sexuality in the Caribbean

Title: The Culture of Gender and Sexuality in the ...

“A major contribution to the scholarship of gender and sexuality in the Caribbean.”--A. Lynn Bolles, University of Maryland

This volume provides an engaging interdisciplinary approach to the study of gender and sexual relations in the Caribbean.  Essays from sociological, literary, historical, and political science approaches cover the Hispanic-, French-, and English-speaking Caribbean areas and address topics such as sexuality, homosexuality, culture, the body, the status of women, and the wider social relations that inform these subjects.

Exploring the Intersections of Gender, Sexuality, and Culture in the Caribbean: An Introduction

Part 1. Theoretical Mediations on Gender in the Caribbean
1. Theorizing Ruptures in Gender Systems and the Project of Modernity in the Twentieth Century Caribbean, by Violet Eudine Barriteau

2. The Globalization of the Discourse on Gender and Its Impact on the Caribbean, by Hilbourne Watson

Part 2. The Political Terrain of Gender and Sexuality

4. A Blueprint for Gender in Creole Trinidad: Exploring Gender Mythology through Calypsos of the 1920s and 1930s, by Patricia Mohammed

5. Popular Imageries of Gender and Sexuality: Poor and Working-Class Haitian Women's Discourses on the Use of Their Bodies, by Carolle Charles

6. "The Infamous Crime against Nature": Constructions of Heterosexuality and Lesbian Subversions in Puerto Rico, by Elizabeth Crespo-Kebler

Part 3. Sexual Orientation and Male Socialization in the Caribbean

7. The Role of the Street in the Socialization of Caribbean Males, by Barry Chevannes

8. Masculinity and Power in Puerto Rico, by Rafael Ramírez

10. Struggling with a Structure: Gender, Agency, and Discourse, by Glyne Griffith

11. "It Hurt Very Much at the Time": Patriarchy, Rape Culture, and the Slave Body-Semiotic, by Joseph C. Dorsey

Linden Lewis is associate professor of sociology and anthropology at Bucknell University and the author of numerous articles on the Caribbean.

"A major contribution to the scholarship of gender and sexuality in the Caribbean."