Items related to Curse of the Narrows 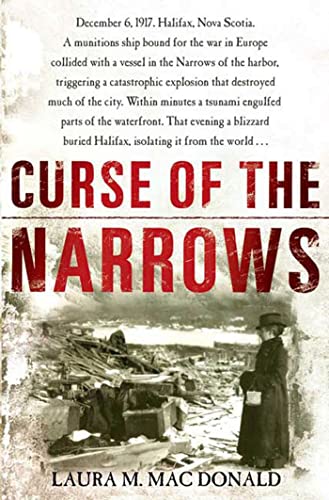 Curse of the Narrows

Title: Curse of the Narrows

The dramatic story of one of the greatest disasters in history

In 1917, the port of Halifax, Nova Scotia, was crowded with ships leaving for war-torn Europe. On December 6th, two of them―the Mont Blanc and the Imo―collided in the Narrows, a hard-to-navigate stretch of the harbor. Ablaze, and with explosions on her deck filling the sky, the Mont Blanc grounded against the city's docks.

As thousands rushed to their windows and into the streets to watch, she exploded with such force that the 3,121 tons of her iron hull vaporized in a cloud that shot up more than 2,000 feet; the explosion was so unusual that Robert Oppenheimer would study its effects to predict the devastation of an atomic bomb. The blast caused a giant wave that swept over parts of the city, followed by a slick, black rain that fell for ten minutes. Much of the city was flattened, and not one in 12,000 buildings within a 16-mile radius left undamaged. More than 1,600 Haligonians were killed and 6,000 injured; and within twenty-four hours, a blizzard had isolated Halifax from the world.

Set vividly against the background of World War I, Curse of the Narrows is the first major account of the world's largest pre-atomic explosion, the epic relief mission from Boston, and the riveting trial of the Mont Blanc's captain and pilot. Laura M. Mac Donald is as adept at describing the dynamics of a chain reaction explosion as she is at chronicling unforgettable human dramas of miraculous survival, unfathomable loss, and the medical breakthroughs in pediatrics and eye surgery that followed the disaster
.
Using primary sources--many of which haven't been read in decades and--with a wonderful feel for narrative history, Mac Donald chronicles one of the most compelling and dramatic events of the 20th century.

Assiduous research, beautiful writing, and a great talent for historical reconstruction make Laura MacDonald's Curse of the Narrows the definitive account of the Halifax explosion of December 1917. MacDonald is a master of minutia--chemistry, laws of navigation, the horrors visited on the poor people of Halifax's north end--and she writes with supreme authority and exquisite detail.

MacDonald begins her account with geography and she sets the scene by examining the bustling port of Halifax in the First World War. Using the very best recent scholarship, she then reconstructs the accident itself, describing closely the series of small errors that lead the Norwegian freighter Imo to ram into the French munitions vessel Mont Blanc in the narrows of Halifax harbor: "The Mont Blanc, with 2,925 tons of explosives, packed in hermetically sealed holds inside a super-heated hull was now the most powerful bomb the war and the world had yet produced." When it exploded, thousands of innocent people were killed in an instant. If MacDonald had limited her investigation into the causes of the accident her book would still be worth buying. She offers much more: examinations of the inquiries and court cases, the official response to the devastation, and above all the ways in which families were challenged by the appalling effects of the explosion. By tracing the struggles of these families, the Duggans, the Frasers, and the Galloways among others, MacDonald brings the scope of the tragedy home to the reader in a way that few would have believed possible. Be warned. Parts of this book are book have an impact on the reader's soul no less than the concussion of the explosion itself. This is a magnificent accomplishment. --William Newbigging


CWO/Visa/MC/AMEX.
All books carefully packaged and promptly shipped.
Subject to prior sale. Returns accepted if notified within 10 days.
DJ's of most titles over $10.00 in Brodart covers.