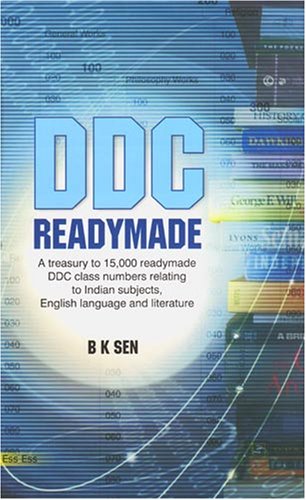 The book provides 15,000 readymade Dewey Decimal Classification (DDC) numbers relating to Indian subjects and English language and literature. It covers four Indic religions, namely Buddhism, Hinduism, Jainism, and Sikhism. For each of these religions, class numbers have been provided for more than 200 subdivisions. The class numbers for around 50 subdivisions of each of the important South Asian languages - including, for example, Assamese, Bengali, Gujarati, Hindi, Malayalam, Nepali, Punjabi, Sanskrit, Sinhalese, Urdu, etc. - have been listed, along with the numbers for other South Asian languages. For literature of each of the aforementioned languages, the class numbers for around 450 subdivisions have been provided. Around 750 class numbers have been included for English language and literature. More than 250 class numbers are available under the heading of History, including all the periods of Indian history and the Indian states and union territories. Class numbers have also been provided for various Indian subjects such as architecture, art, economic development, elections, flora and fauna, folk dancing/folk literature, food supply, geology, higher education, journalism, museums, newspapers, organizations, public administration, social problems/social welfare, statistics, etc., with more than 40 geographical subdivisions. Necessary instructions show how class numbers are located.

Bimal Kanil Sen served the University of Malaya as a visiting professor from 1995 till 1997.

We specialize in high level science, technical, and reference books and are accumulating a growing collection of popular non-fiction titles. www.gullsnestbooks.com


We securely package all of our orders, and include tracking information.