Items related to THE DEVIL WENT DOWN TO AUSTIN 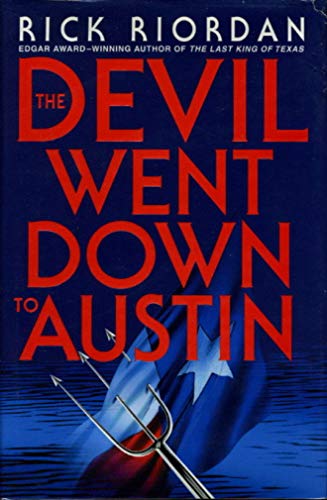 THE DEVIL WENT DOWN TO AUSTIN

Title: THE DEVIL WENT DOWN TO AUSTIN

Rick Riordan, triple-crown winner of the Edgar, Anthony, and Shamus Awards, has already emblazoned his name on the map of crime fiction with his Tres Navarre novels -- a fast, funny, totally hip series that blends masterful writing with richly drawn characters and nonstop action.

Now Riordan brings his P.I. Tres Navarre to the heart of Texas -- Austin -- with a fiercely original thriller that explores family ties as deep and twisted as the waterways of Lake Travis.

Tres Navarre, private eye and sometimes English professor, is hoping for a laid-back working vacation when he accepts a teaching gig at the University of Texas at Austin, even if it means shacking up for six weeks with his big brother Garrett, who calls Austin home.

Garrett Navarre -- computer programmer extraordinaire, Jimmy Buffett fanatic, and all-around eccentric -- is hoping to retire a multimillionaire thanks to a high-tech start-up company he and two buddies have launched. Garrett has bet everything from his career to the Navarre family ranch that the company will stay alive long enough to make a public stock offering, allowing him to ride the Austin high-tech boom right into the saddle of luxury.

Both Tres's and Garrett's hopes are shattered with a single gunshot. Garrett's oldest friend and business partner ends up murdered at his lakefront home -- and Garrett is the only suspect.

As Tres delves into Garrett's bizarre world to find the truth behind the murder, he comes face-to-face with the damaged relationships, violent lives, and billion-dollar schemes of a brave new high-tech world.

Among the players: a corporate takeover artist with a trail of broken enemies in his wake and an overzealous desire to make Garrett's company his own; the victim's wife, a hard-edged beauty haunted by three generations of family failure; and the head of an oil-rich clan with more power than morals and enough skeletons in the closet to man a ghost ship. Connecting them all -- the beautiful waters of Lake Travis and an unspeakable evil that lies within its depths.

A suspense novel of depth and sizzling emotional power, The Devil Went Down to Austin is Rick Riordan's most entertaining work to date.

Things are good for San Antonio middle-school teacher-cum-mystery author Rick Riordan--great, in fact. His first two outings featuring San Antonio PI and part-time English professor Tres Navarre (Big Red Tequila, The Widower's Two Step) scored Shamus, Anthony, and Edgar awards, and The Last King of Texas has been likened to the proverbial sliced bread. In The Devil Went Down to Austin, on the other hand, things stink for Tres Navarre. His paraplegic brother, Garrett, has surreptitiously mortgaged the brothers' Austin ranch to subsidize an Internet startup. One of Garrett's partners, Ruby McBride, has been making nice with a sleazy corporate-takeover maven, Matthew Peña, and Garrett's been violently feuding with his other partner and lifelong friend, Jimmy Doebler. As for Jimmy, his day started with his divorce from Ruby and ended with a shot to the head. Worse yet, Jimmy bought it in his Chevy pickup by his lakeside home, just feet away from a ranting, beach-sprawled Garrett.

All that remains for Tres to do is exonerate his brother, find the real killer (whose clue-laden e-mails alternate with Tres's narrative, delivering Texas-sized creepiness), save the ranch, and with the help of Maia Lee, a beautiful lawyer from his past, untangle a skein of Doebler family murder, misery, and hurt. Witty, sharp as glass, and plotted as well as it's written, The Devil Went Down to Austin paints a high-tech Texas laced with treachery and tequila before a cranked-up Jimmy Buffett backdrop. Expect great things, because Riordan delivers. --Michael Hudson