Items related to LA DIABLESSE AND THE BABY. A CARIBBEAN FOLKTALE AS... 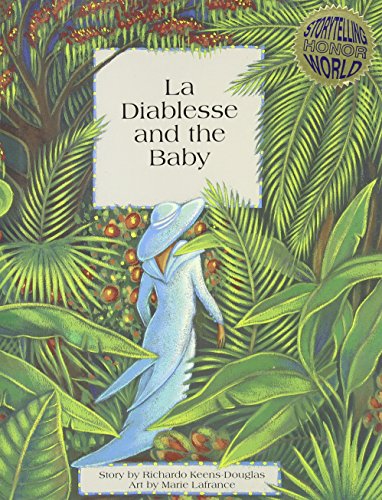 LA DIABLESSE AND THE BABY. A CARIBBEAN FOLKTALE AS TOLD BY RICHARDO KEENS-DOUGLAS, ILLUSTRATED BY MARIE LAFRANCE

AbeBooks Seller Since May 18, 2005 Seller Rating

4to, wrps, unpag., illus. Signed by Keens=Douglas. This story comes out of the rich Caribbean oral folk tradition. Quite beautiful illustrations. Bookseller Inventory # 154265

Title: LA DIABLESSE AND THE BABY. A CARIBBEAN ...

Winner of both the Alcuin Society Design Award and the Storytelling World Honor Award, this is the eerie and colorful tale of the legendary creature--half human, half demon--that roams the Caribbean night, and how a brave Grandma outwits it.

Richardo Keens-Douglas, an actor, playwright, author, and storyteller, has published several picture books for children, including The Trial of the Stone and The Nutmeg Princess. His works have appeared on American Bookseller's "Pick of the Lists" and been nominated for the Governor General's Award and the Silver Birch Award, among others. He presently divides his time between Grenada and Toronto.

Marie Lafrance was born in Quebec City. Following her love for drawing, she studied graphic arts at a CEGEP in Vieux-Montréal and also studied etching at Studio Graff. At age twenty-three Marie began working as a freelance illustrator, applying her talent to school textbooks, magazines, book covers and posters.

Libros Latinos specializes in books from and about Mexico and Latin America, including new, rare & out-of-print. Please visit our web site where you may special order thousands of out-of-stock titles. We actively travel through Latin and Central America buying books. Please visit us at http://www.libroslatinos.com We encourage you to place your order directly through our Website


We accept cash, checks, money orders, as well as
American Express, Visa and MasterCard. We also accept Paypal.
(For Paypal additional nominal fees of approx 2.5% may apply in order to cover Paypal's 5% commission.)

We ship via Unite States Postal Service (USPS) media mail, with delivery confirmation, within the US unless other means or service requested. Standard (media mail) USPS shipping costs are $4.50 for the first book and $2 for each additional book. Media mail generally takes 5 to 14 days...


Orders usually ship within 2 business days. Shipping costs are based on books weighing 2.2 LB, or 1 KG. If your book order is heavy or over-sized, we may contact you to let you know extra shipping is required.