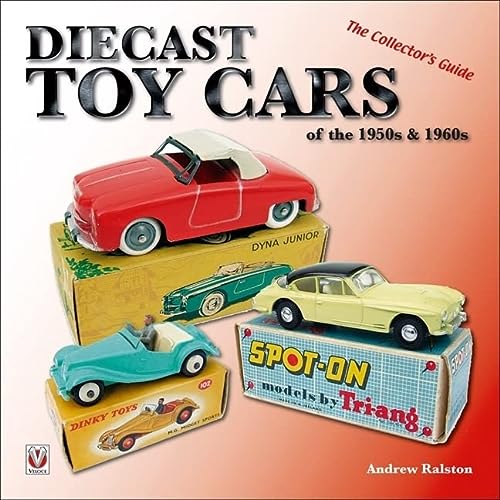 AbeBooks Seller Since May 2, 2016 Seller Rating

Quantity Available: 1
View all  copies of this book
Buy New
Price: US$ 46.89 Convert Currency
Shipping: US$ 9.80 From France to U.S.A. Destination, rates & speeds
Add to basket

Collecting diecast toy cars has become an increasingly popular hobby over the last 25 years. Many of the classic diecast cars of the 1950s and 1960s are now valuable collectors’ items, and surviving examples in mint and boxed condition regularly fetch significant sums at specialist auctions. This book provides a comprehensive survey of the companies that made these toys in the 1950s and 1960s, not only in Britain but in other European countries, the USA, Japan and beyond. Major names such as Dinky Toys, Corgi Toys, Spot-On and Matchbox (Great Britain), Solido (France), Marklin and Gama (Germany ), Tekno (Denmark) and Tootsietoy (USA) are examined, but a unique feature of the book is the wealth of information provided on many smaller and more obscure brands. These include Crescent, Budgie, Chad Valley and Lone Star (UK), CIJ and JRD (France), Dalia (Spain), Buby (Argentina), Gamda (Israel) and many others about which information is hard to come by. A special chapter is devoted to early Japanese diecast models by Cherryca Phenix, Model Pet and Diapet, which are among the rarest and most sought-after of all diecasts. Fascinating insights into company histories are provided, together with 250 photographs of rare examples of the toys themselves, in mint condition with their original boxes. A further unique feature is the inclusion of a large selection of colorful and evocative illustrations from catalogs and period trade advertisements. For the newcomer to the collecting hobby, this book will provide an ideal guide to the history of the manufacturers active in this field, while experienced collectors will make many new discoveries. At the end of the book, readers will find a handy glossary listing the names of many of the companies that manufactured diecast toy cars in the 1950s and 1960s.

Andrew Ralston received his first Dinky Toy car, a Riley, when he was about five years old, and ever since has been passionately interested in anything to do with cars. He has built up an extensive collection of models, with a preference for the more unusual items, and has written many articles on the subject for magazines in Britain and the USA. Educated at the Universities of Glasgow and Oxford, Andrew is a teacher by profession and has also published numerous textbooks on the English language.

"This volume provides valuable background information on the companies that made these toys. For the newcomer to the collecting hobby, this book will prove to be an ideal guide to the history of both the major and minor manufacturers active in the this field, while experienced collectors will make many new discoveries." – Old Autos, Canada