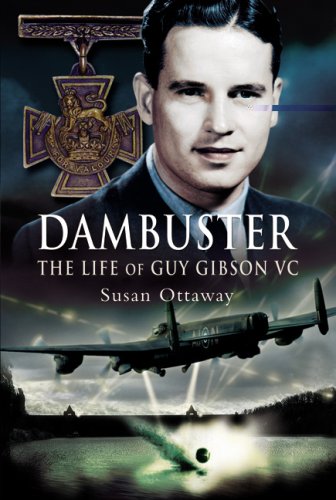 Synopsis: Few men have a better claim to be called a legend in his own lifetime than Guy Gibson. Leader of the famous Dambuster Raid of May, 1943 which became part of the popular folklore of the Second World War after the film in which Richard Todd took the part of the hero, he himself was tragically in an air crash in 1944.

Born in India in 1918 and brought up in England, Guy Gibson joined the RAF in November, 1936. Thereafter his career can be seen as a battle between, on the one hand, his uncertain temperament and less than ideal private life, and, on the other, his undoubted skills as an airman and as a leader of men. The war was to bring him adventure and, later, fame. He took part in the first aerial attack of the war, on the Kiel Canal; he served in Fighter Command and then, in 1943, came the famous raid on the Mohne and Eder dams for which he was awarded the VC.

By now a hero of international fame, he was sent on a Public Relations tour of North America, but basically he was a flyer and, refusing to remain grounded, he died an airmen’s death.

About the Author: Susan Ottaway is an author and historian.

Book Description Paperback. Condition: Very Good. The book has been read, but is in excellent condition. Pages are intact and not marred by notes or highlighting. The spine remains undamaged. Seller Inventory # GOR004114532

Book Description Paperback. Condition: Good. The book has been read but remains in clean condition. All pages are intact and the cover is intact. Some minor wear to the spine. Seller Inventory # GOR008384266

Book Description Pen and Sword, 2007. Condition: Good. A+ Customer service! Satisfaction Guaranteed! Book is in Used-Good condition. Pages and cover are clean and intact. Used items may not include supplementary materials such as CDs or access codes. May show signs of minor shelf wear and contain limited notes and highlighting. Seller Inventory # 1844156052-2-4