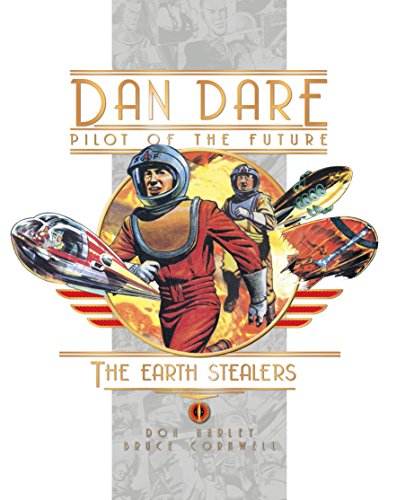 The continuing of one of science fiction's most enduring hero, Dan Dare, Pilot of the Future!

Dan Dare and Digby, awaken, after an unknown number of years, from deep-space hibernation to find themselves lost and adrift in an unknown region and orbiting a mysterious planet, seemingly made of platinum. Now our two plucky heroes must free an enslaved race of aliens and fight to return to their home world, although what they discover there remains a terrible mystery...

Don Harley studied art at Epsom College of Art, where he was spotted by Frank Hampson who was there to give a talk about Dan Dare. Harley was given a job in Hampson's studio where he became the backbone of the strip, particularly during Hampson's periods of illness. He continued to share art duties with Eric Eden and Joan Porter until the Hampson studio was disbanded in 1959. He took over the strip, first working along side Frank Bellmay before working with Bruce Cornell when Harley was promoted to lead artist. He was to draw the strip continuously until 1962.

Born in the USA, Bruce Cornwell came to England at the age of 15 with his father. He studied art in both London and Paris. He served in the Merchant Navy during WWII, after which he established himself as a technical and general illustrator. He was hired to assist Frank Hampson and drew all the spaceships for the early episodes of Dan Dare. After a few months and following a disagreement with Hampson, Cornwell left the studio and Dan Dare, only to return once Hampson had finally quit the strip and his studio was disbanded. Cornwell went on to assist Don Harley on the strip until its demise.