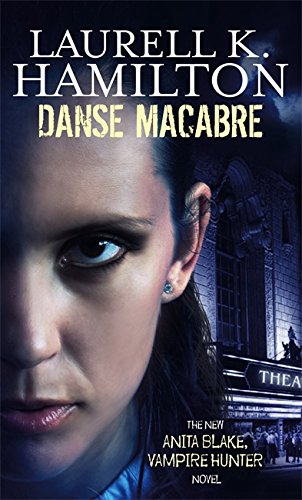 From the Inside Flap: It was the middle of November. I was supposed to be out jogging, but instead I was sitting at my breakfast table talking about men, sex, werewolves, vampires, and that thing that most unmarried but sexually active women fear most...

Anita Blake needs to be concentrating on a dangerous situation: the ardeur, the sexual power that flows between Anita and Jean-Claude, Master Vampire of the City, and Richard, the volatile werewolf who loves her passionately, is reaching new levels, perhaps evolving into something altogether new. The ardeur seems to be choosing new lovers for Anita, acting with a will of its own. As Jean-Claude says, the ardeur is hunting powerful prey. The unexpected effect of this is that Jean-Claude's own power as a master vampire has grown to new levels -- and Richard, never predictable, is changing too.

But as the days pass, Anita's less interested in vampire politics than in an ancient, ordinary dread she shares with women down the ages: she may be pregnant. And, if she is, whether the father is a vampire, a werewolf, or someone else entirely, she knows perfectly well that being a Federal Marshall, known for raising the dead and being a vampire executioner, is no way to bring up a baby...

Book Description Paperback. Condition: Very Good. The book has been read, but is in excellent condition. Pages are intact and not marred by notes or highlighting. The spine remains undamaged. Seller Inventory # GOR001239145

Book Description Orbit 07/06/2007, 2007. Condition: Good. Will be shipped promptly from UK warehouse. Book is in good condition with no missing pages, no damage or soiling and tight spine. There may be some dog-eared pages showing previous use but overall a great book. Seller Inventory # 9053-9781841493190

Book Description Orbit, 2007. Paperback. Condition: Used; Good. Page colour - ?discoloured in accordance with book age. **Simply Brit** Shipped with Premium postal service within 24 hours from the UK with impressive delivery time. We have dispatched from our book depository; items of good condition to over ten million satisfied customers worldwide. We are committed to providing you with reliable and efficient service at all times. Seller Inventory # 1731247

Book Description Orbit, 2007. Paperback. Condition: Used; Good. **SHIPPED FROM UK** We believe you will be completely satisfied with our quick and reliable service. All orders are dispatched as swiftly as possible! Buy with confidence!. Seller Inventory # mon0001724573

Book Description Orbit 07/06/2007, 2007. Condition: Very Good. This book is in very good condition and will be shipped within 24 hours of ordering. The cover may have some limited signs of wear but the pages are clean, intact and the spine remains undamaged. This book has clearly been well maintained and looked after thus far. Money back guarantee if you are not satisfied. See all our books here, order more than 1 book and get discounted shipping. . Seller Inventory # 7719-9781841493190

Book Description Orbit, 2007. Paperback. Condition: Used; Good. Dispatched, from the UK, within 48 hours of ordering. This book is in good condition but will show signs of previous ownership. Please expect some creasing to the spine and/or minor damage to the cover. Damaged cover. The cover of is slightly damaged for instance a torn or bent corner. Aged book. Tanned pages and age spots, however, this will not interfere with reading. Grubby book may have mild dirt or some staining, mostly on the edges of pages. Seller Inventory # CHL5238098