Items related to Death at Dartmoor 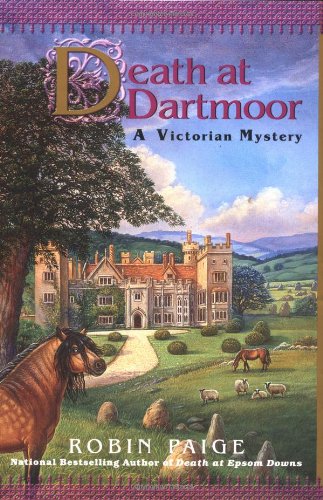 Black remainder mark on the outer page edges. Brand new and unread first edition, very crisp and fresh! Gift Quality! 324 new and unread suspense-filled pages! Signed by the author on the title page! Dj is nicely preserved in a brand new protective mylar plastic cover! "A sentence to Dartmoor Prison is a sentence to a living hell." Lord Charles Sheridan and his American wife, Kate----who "do for turn-of-the-century technology and detection what Elizabeth Peters' Peabody and Emerson have done for Victorian Egyptology" (Gothic Journal)----have heard some truly awful things about Britain's most notorious prison. And now----in the mythic depths of this mist-shrouded moor----they're going to confront the rumors. Get the facts. And find the truth." Size: 8vo - over 7ľ" - 9ľ" tall. Bookseller Inventory # 020036

"Robin Paige's detectives do for turn-of-the-century technology and detection what Elizabeth Peters' Peabody and Emerson have done for Victorian Egyptology." (Gothic Journal)

Lord Charles Sheridan and his American wife, Kate, have come to Britain's most notorious prison so that Kate can research her new Gothic novel-and Charles can meet with one of the inmates. But when the inmate escapes-and a body turns up on the moor-the Sheridans join forces with Arthur Conan Doyle to determine if the missing convict is connected to this murderous new case.