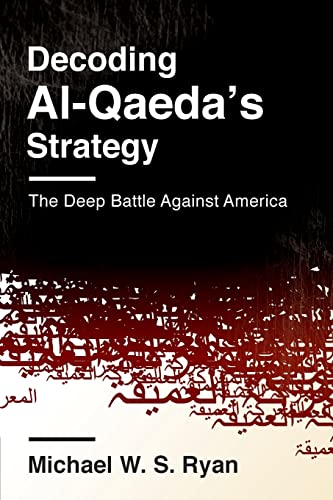 Synopsis: By consulting the work of well-known and obscure al-Qaeda theoreticians, Michael W. S. Ryan finds jihadist terrorism strategy has more in common with the principles of Maoist guerrilla warfare than mainstream Islam. Encouraging strategists and researchers to devote greater attention to jihadi ideas rather than jihadist military operations, Ryan builds an effective framework for analyzing al-Qaeda's plans against America and constructs a compelling counternarrative to the West's supposed "war on Islam."

Ryan examines the Salafist roots of al-Qaeda ideology and the contributions of its most famous founders, Osama Bin Laden and Ayman al-Zawahiri, in a political-military context. He also reads the Arabic-language works of lesser known theoreticians who have played an instrumental role in framing al-Qaeda's so-called war of the oppressed. These authors readily cite the guerrilla strategies of Mao, Che Guevara, and the mastermind of the Vietnam War, General Giap. They also incorporate the arguments of American theorists writing on "fourth-generation warfare."

Through these texts, readers experience events as insiders see them, and by concentrating on the activities and pronouncements of al-Qaeda's thought leaders, especially in Yemen, they discern the direct link between al-Qaeda's tactics and trends in anti-U.S. terrorism. Ryan shows al-Qaeda's political-military strategy to be a revolutionary and largely secular departure from the classic Muslim conception of jihad, adding invaluable dimensions to the operational, psychological, and informational strategies already deployed by America's military in the region.

About the Author: Michael W. S. Ryan, a senior fellow at the Jamestown Foundation, studied Arabic in Egypt and received his Ph.D. from Harvard University. He served as a senior executive in the U.S. Departments of State and Defense and as vice president of the Millennium Challenge Corporation and the Middle East Institute. He lives in Virginia.

Book Description Columbia University Press, 2016. Paperback. Condition: Good. Connecting readers with great books since 1972. Used books may not include companion materials, some shelf wear, may contain highlighting/notes, may not include cdrom or access codes. Customer service is our top priority!. Seller Inventory # S_252452858

Book Description Columbia University Press, 2016. Condition: Good. A+ Customer service! Satisfaction Guaranteed! Book is in Used-Good condition. Pages and cover are clean and intact. Used items may not include supplementary materials such as CDs or access codes. May show signs of minor shelf wear and contain limited notes and highlighting. Seller Inventory # 0231163851-2-4

Book Description Columbia University Press, 2016. Paperback. Condition: GOOD. Has little wear to the cover and pages. Contains some markings such as highlighting and writing. Supplemental materials are not guaranteed with any used book purchases. Seller Inventory # 0231163851_abe_gd

Book Description Columbia University Press, 2016. Paperback. Condition: VERY GOOD. Pages are intact and are not marred by notes or highlighting, but may contain a neat previous owner name. The spine remains undamaged. Supplemental materials are not guaranteed with any used book purchases. Seller Inventory # 0231163851_abe_vg

8. Decoding Aland#8211;Qaeda`s Strategy and#8211; The Deep Battle Against America

9. Decoding Aland#8211;Qaeda`s Strategy and#8211; The Deep Battle Against America

Shipping: US$ 19.58
From United Kingdom to U.S.A.
Destination, rates & speeds