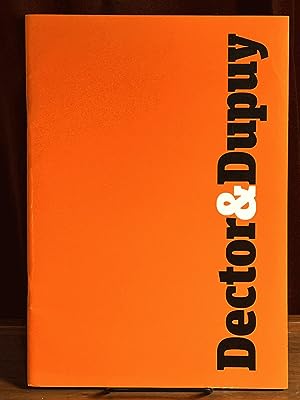 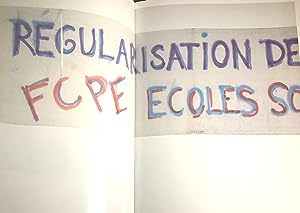 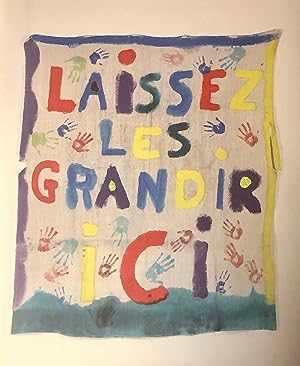 Very Good, 4to, 13" x 9." Bilingual, text in French and English. Orange glossy paper wrappers with staple binding. No lettering to spine. Covers have light rubbing to front and back, slightly bumped tips, slight edge wear, and light wrinkling along the spine, else clean and intact, binding tight. Pages pristine and intact except for light edge wear at bottom and a small bump in lower-right corner. Includes illustrations of the protest banners, some of which are full-page and in color. Unpaginated, 43 pp., including illustrations. A collection of reprinted documentation and essays about the project undertaken by the French artist duo, Dector & Dupuy, in which they recreated hand-painted protest banners that began appearing on schools in Paris. Keren Detton summarizes their project on the back, "Both artists and experts in urban reconnaissance, Michel Dector and Michel Dupuy had noted a proliferation of protest banners on Paris primary schools over a two-year period. Part of a support campaign for pupils with 'sans-papiers' immigrant parents, the slogans had a painterly quality that caught their eye; and late in 2007 they began contacting the anonymous creators via the Education Sans Frontieres Network (RESF), offering to exchange the often faded or tattered banners against new copies they would make themselves. Each of the resultant exchanges led to fresh encounters and consideration of the issues implicit in this way of working: political commitment, artistic intentions, group creativity, the relationship between original and copy, and artistic value added." Correspondence from Dector & Dupuy is printed in the back. Essays by Marie de Brugerolle, Christian Ruby, and Claire Guezengar. This catalog was published on the occasion of a Dector & Dupuy exhibition titled, _LECL_, which ran from November 22, 2009-January 10, 2010 at Le Quartier Centre for Contemporary Art in Quimper, Brittany, France. Seller Inventory # 00335

Formerly Richard L. Press Fine and Rare Books, we carry a kaleidoscopic array of art books, including design, architecture, photography, dance, fashion, ceramics, papermaking ? all the creative enterprises all over the world from the ancient past to the edgiest contemporary. We also cultivate a modest but tasteful collection of rare and antiquarian books and take pride in our entire collection?s condition and reasonable pricing. Our store is artist and woman-owned, independent, and tasked with the mission of inclusively supporting local art & culture.


Insurance is not included and some items may require additional postage depending on weight and size.