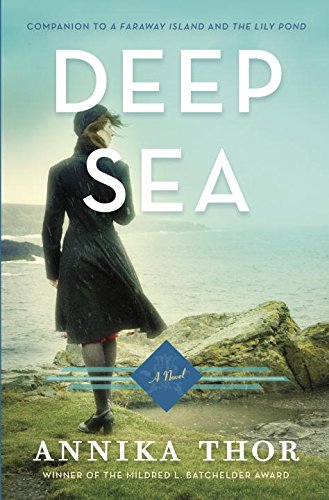 Synopsis: Readers of Anne of Green Gables and Hattie Ever After will love following Stephie’s story, which takes place during World War II and began with A Faraway Island and continued with The Lily Pond.

Three years ago, Stephie and her younger sister, Nellie, escaped the Nazis in Vienna and fled to an island in Sweden, where they were taken in by different families. Now sixteen-year-old Stephie is going to school on the mainland. Stephie enjoys her studies, and rooming with her school friend, May. But life is only getting more complicated as she gets older.

Stephie might lose the grant money that is funding her education. Her old friend Verra is growing up too fast. And back on the island, Nellie wants to be adopted by her foster family. Stephie, on the other hand, can’t stop thinking about her parents, who are in a Nazi camp in Austria. If only the war would end. . . .

Like the deep sea, Stephie’s life is filled with danger and darkness, but also with beauty and hope as she learns to stand up for her beliefs and be true to herself.

A CBC Notable Social Studies Trade Book of the Year

*"This novel about coming of age during a complicated, tragic time in history is both delicate and poignant."--Publisher's Weekly, Starred

"The novel’s strength lies in its rich cast of secondary characters whose stories bring wartime Sweden to life."--Booklist

"The present tense and a limited third-person narration that reflects Stephie’s every thought and emotion give the story unusual immediacy, nuance, and impact."--The Hornbook Magazine

“Deep Sea and the story of the Steiner sisters is a much-needed voice in the sea of World War II novels for youth.”—VOYA

Praise for A Faraway Island

"[A] welcome addition to the canon of WWII stories."--The Hornbook Magazine, Starred

Praise for The Lily Pond

"This distinguished Holocaust story will resonate."--Booklist
From the Hardcover edition.

About the Author: ANNIKA THOR was born and raised in a Jewish family in Göteborg, Sweden. She has been a librarian, has written for both film and theater, and is the author of many books for children, young adults, and adults. She lives in Stockholm. A Faraway Island, The Lily Pond, and Deep Sea are the first three novels in a quartet featuring the Steiner sisters, which has been translated into numerous languages and has garnered awards worldwide.

Book Description Delacorte Books for Young Readers, 2015. Condition: Good. Shows some signs of wear, and may have some markings on the inside. Seller Inventory # GRP112773749

Book Description Random House Children's Books. Library Binding. Condition: Very Good. A copy that has been read, but remains in excellent condition. Pages are intact and are not marred by notes or highlighting, but may contain a neat previous owner name. The spine remains undamaged. An ex-library book and may have standard library stamps and/or stickers. At ThriftBooks, our motto is: Read More, Spend Less. Seller Inventory # G0375991328I4N10

Book Description Delacorte Press, 2015. Condition: Good. A+ Customer service! Satisfaction Guaranteed! Book is in Used-Good condition. Pages and cover are clean and intact. Used items may not include supplementary materials such as CDs or access codes. May show signs of minor shelf wear and contain limited notes and highlighting. Seller Inventory # 0375991328-2-4