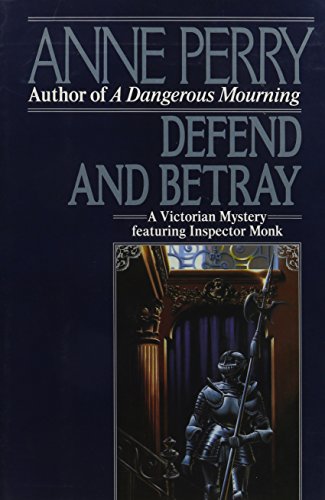 Hint of edge and corner wear to the dj, gently scuffed and scratched, overall a very clean signed copy! Inscribed and dated by the author on the title page! Dj is nicely preserved in a brand new protective mylar plastic cover! 385 very clean, unmarked and uncreased, mystery-riddled and suspense-filled pages! "'After a brilliant military career, bravely serving crown and country in India, esteemed General Thaddeus Carlyon finallly meets death, not in the frenzy of battle, but at an elegant London dinner party. In a bizarre incident that shocks aristocratic London, General Carlyon is killed in what first appears to be a freak accident. But the General's beautiful wife, alexandra, readily confesses that she killed him ---- a story she clings to even under ths shadow of the gallows." Size: 8vo - over 7ľ" - 9ľ" tall. Bookseller Inventory # 026594

"A richly textured and timeless novel of suspense. Her Victorian England pulsates with life and is peopled with wonderfully memorable characters."
Faye Kellerman
Although esteemed General Thaddeus Carlyon meets his death in a freak accident at home, his beautiful wife, Alexandra, confesses that she killed him. Investigator William Monk, nurse Hester Latterly, and the brilliant Oliver Rathbone, counsel for the defense, work feverishly to break down the wall of silence raised by the accused and her husband's proud family. With the trial only days away, they inch toward the dark and appalling heart of the mystery. The final act is a courtroom masterpiece, through which we dare not breathe too deeply, lest the precarious balance of a woman's life be lost.
From the Paperback edition.

Anne Perry is a New York Times bestselling author noted for her memorable characters, historical accuracy and exploration of social and ethical issues. Her two series, one featuring Thomas Pitt and one featuring William Monk, have been published in multiple languages. Anne Perry has also published a successful series based around World War One and the Reavley family, and the recent standalone novel The Sheen on the Silk. Anne Perry was selected by The Times as one of the twentieth century's '100 Masters of Crime'.