Items related to The Deficit Myth: Modern Monetary Theory and the Birth...

Home Kelton, Stephanie The Deficit Myth: Modern Monetary Theory and the Birth of the ...
Stock Image 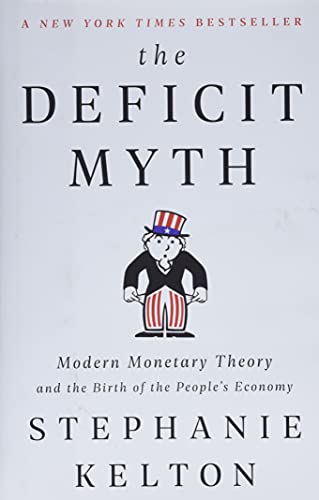 The Deficit Myth: Modern Monetary Theory and the Birth of the People's Economy

The leading thinker and most visible public advocate of modern monetary theory - the freshest and most important idea about economics in decades - delivers a radically different, bold, new understanding for how to build a just and prosperous society.
Any ambitious proposal - ranging from fixing crumbling infrastructure to Medicare for all or preventing the coming climate apocalypse - inevitably sparks questions: how can we afford it? How can we pay for it? Stephanie Kelton points out how misguided those questions really are by using the bold ideas of modern monetary theory (MMT), a fundamentally different approach to using our resources to maximize our potential as a society.
We've been thinking about government spending in the wrong ways, Kelton argues, on both sides of the political aisle. Everything that both liberal/progressives and conservatives believe about deficits and the role of money and government spending in the economy is wrong, especially the fear that deficits will endanger long-term prosperity.
Through illuminating insights about government debt, deficits, inflation, taxes, the financial system, and financial constraints on the federal budget, Kelton dramatically changes our understanding of how to best deal with important issues ranging from poverty and inequality to creating jobs and building infrastructure. Rather than asking the self-defeating question of how to pay for the crucial improvements our society needs, Kelton guides us to ask: which deficits actually matter? What is the best way to balance the risk of inflation against the benefits of a society that is more broadly prosperous, safer, cleaner, and secure?
With its important new ways of understanding money, taxes, and the critical role of deficit spending, MMT busts myths that prevent us from taking action because we can't get beyond the question of how to pay for it.

Stephanie Kelton, professor of economics and public policy at the State University of New York at Stony Brook and Bloomberg contributing columnist, has been called a "prophetic economist" and a "Rock Star" of progressive economics. Stephanie is the founder and of the top-rated economic blog New Economic Perspectives, and a member of the TopWonks network of the nation's best thinkers. In 2016, Politico recognized her as one of the fifty people across the country most influencing the political debate. Kelton was chief economist on the U.S. Senate Budget Committee (minority staff) and an advisor to the Bernie2016 presidential campaign. Kelton is a regular commentator on national radio and television and speaks across the world at large gatherings of people interested in global finance, political economy and public policy. She has superb connections in all areas of print and broadcast national media. Her op-eds have appeared in The New York Times, The Washington Post, The Los Angeles Times and Bloomberg.


We guarantee the condition of every book as it's described on the Abebooks web sites. If you're dissatisfied with your purchase (Incorrect Book/Not as Described/Damaged) or if the order hasn't arrived, you're eligible for a refund within 30 days of the estimated delivery date. If you've changed your mind about a book that you've ordered, please use the Ask bookseller a question link to contact us and we'll respond within 2 business days.Big River Books 5001 McNeel Industrial Blvd Powder Springs ...


Orders usually ship within 2 business days. Shipping costs are factored into our pricing. We will never contact you asking for additional shipping costs.