Home Adam Tooze The Deluge: The Great War and the Remaking of Global Order 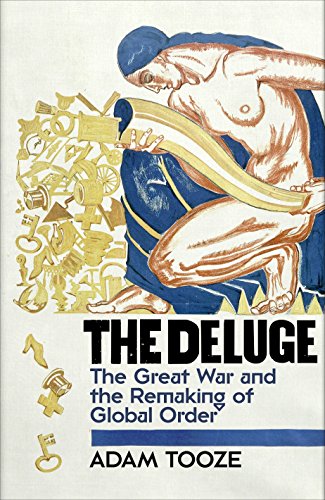 The Deluge: The Great War and the Remaking of Global Order

Synopsis: In the depths of the Great War, with millions dead and no imaginable end to the conflict, societies around the world began to buckle. The heart of the financial system shifted from London to New York. The infinite demands for men and materiel reached into countries far from the front. The strain of the war ravaged all economic and political assumptions, bringing unheard-of changes in the social and industrial order. A century after the outbreak of fighting, Adam Tooze revisits this seismic moment in history, challenging the existing narrative of the war, its peace, and its aftereffects. From the day the United States entered the war in 1917 to the precipice of global financial ruin, Tooze delineates the world remade by American economic and military power. Tracing the ways in which countries came to terms with America's centrality-including the slide into fascism-The Deluge is a chilling work of great originality that will fundamentally change how we view the legacy of World War I.

About the Author: Adam Tooze is the Barton M. Biggs Professor of History and codirector of International Security Studies at Yale University. He is the author of Statistics and the German State, 1900-1945 and The Wages of Destruction, which won the Wolfson Prize and the Longman Prize, and was an Economist book of the year.

1. The Deluge: The Great War and the Remaking of Global Order

Book Description Allen Lane, 2014. Condition: Good. Ships from the UK. Former Library book. Shows some signs of wear, and may have some markings on the inside. Seller Inventory # GRP83412188

2. The Deluge: The Great War and the Remaking of Global Order

Book Description Allen Lane, 2014. Condition: Good. Ships from the UK. Shows some signs of wear, and may have some markings on the inside. Seller Inventory # GRP98104504

3. The Deluge: The Great War and the Remaking of the World Order

Book Description Penguin Books Ltd. Hardback. 1. On the centenary of the outbreak of the First World War, Deluge is a powerful explanation of why the war's legacy continues to shape our world - from Adam Tooze, the Wolfson Prize-winning author of The Wages of Destruction. In the depths of the Great War, with millions of dead and no imaginable end to the conflict, societies around the world began to buckle. As the cataclysmic battles continued, a new global order was being born. Adam Tooze's panoramic new book tells a radical, new story of the struggle for global mastery from the battles of the Western Front in 1916 to the Great Depression of the 1930s. The war shook the foundations of political and economic order across Eurasia. Empires that had lasted since the Middle Ages collapsed into ruins. New nations sprang up. Strikes, street-fighting and revolution convulsed much of the world. And beneath the surface turmoil, the war set in motion a deeper and more lasting shift, a transformation that continues to shape the present day: 1916 was the year when world affairs began to revolve around the United States. America was both a uniquely powerful global force: a force that was forward-looking, the focus of hope, money and ideas, and at the same time elusive, unpredictable and in fundamental respects unwilling to confront these unwished for responsibilities. Tooze shows how the fate of effectively the whole of civilization - the British Empire, the future of peace in Europe, the survival of the Weimar Republic, both the Russian and Chinese revolutions and stability in the Pacific - now came to revolve around this new power's fraught relationship with a shockingly changed world. The Deluge is both a brilliantly illuminating exploration of the past and an essential history for the present. copy in very slightly damaged condition and has title page removed but otherwise unread. Seller Inventory # 3681666

5. The Deluge: The Great War and the Remaking of Global Order

7. The Deluge: The Great War and the Remaking of Global Order