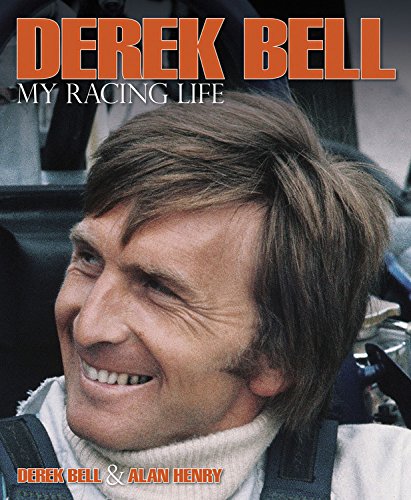 This is a highly readable autobiography in which Derek Bell recalls his diverse motorsport life, including his eight classic 24-hour endurance sports car race victories.

Derek Bell has enjoyed one of the most successful, diverse and wide-ranging careers of any British racing driver. In this highly readable autobiography he recalls a life in motor racing that spanned over 40 years and was packed with achievement and diversity. Bell is best-known as the consummate endurance sports car driver who won the Le Mans 24 Hours five times and the Daytona 24 Hours three times, teamed with racing greats such as Jacky Ickx, Hans Stuck and Al Holbert. Besides sports car racing, he has competed in many different cars and categories, from a works seat with Ferrari in Formula 1 in 1968 to rally driving a Vauxhall. This is a uniquely rich and entertaining story that will appeal to all motor racing enthusiasts.

- Personalities and problems: mentors such as his stepfather (‘The Colonel'), Tom Wheatcroft and John Wyer; fellow racers such as Jacky Ickx, David Purley and Mike Hailwood; ‘problem' exercises such as British Leyland's mismanaged Jaguar XJ Coupé racing effort of 1976–77.

- Special relationship with Porsche: driving the famed 917 for JW Automotive in 1971; 935 and 936 cars before the Group C category arrives for 1982; works driver of Porsche's all-conquering 956 and 962 from 1982 to 1987, including winning World Endurance Championship (1985) and World Sports Car Championship (1986); subsequent Porsche achievements in America.

- Endurance racing technique: the physical and mental demands; pacing yourself over 124 hours; the importance of team-mates, exemplified by the partnership with Jacky Ickx that brought three Le Mans wins.

- A new life in the USA: racing more and more in America, where the last of his eight wins in 24-hour races came at Daytona in 1989, aged 47; racing on through the 1990s while in his 50s, mainly in American sports car events; settling to live in Florida.

Alan Henry has known Derek Bell since 1971, when he was reporting on Formula 2 as a journalist for Motoring News. He soon moved up to Formula 1 and covered it for 35 years for numerous newspapers and magazines, including The Guardian and Autocar. He was also the editor of Autocourse, the annual record of international motor racing, from 1988 to 2012.