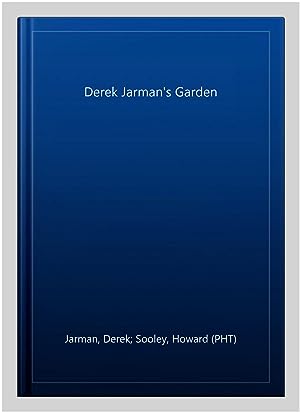 Quantity: 1
View all  copies of this book
Buy Used
Price: US$ 18.58 Convert Currency
Shipping: US$ 20.65 From United Kingdom to U.S.A. Destination, rates & speeds
Add to basket

Derek Jarman created his own garden in the flat, bleak expanse of shingle that faces the nuclear power station in Dungeness, Kent. A passionate gardener from childhood, he combined his painter's eye, his horticultural expertise and his ecological convictions to produce a landscape which mixed the flint, shells and driftwood of Dungeness; sculptures made from stones; the area's indigenous plants; and shrubs and flowers introduced by Jarman himself. This book, the last he ever wrote, is his own record of how this garden evolved, from its beginnings in 1985 to the day of his death in 1994.

Derek Jarman's Garden is a personal account of how Jarman's garden evolved, from its earliest beginnings in 1986 through to his death in February 1994. Jarman, against all odds, produced a breathtakingly beautiful garden in the most inhospitable of places. A passionate gardener since childhood, Jarman combined his painter's eye, his horticultural expertise and his ecological convictions to produce a landscape which combined the flints, shells and driftwood of Dungeness; sculptures made from stones, old tools and found objects; the area's indigenous plants; and shrubs and flowers introduced to the area by Jarman himself. Howard Sooley's photographs capture the garden during all its different stages and in every season of the year. Photographs from various angles reveal the garden's complex geometric plan, its magical stone circles, and its beautiful and bizarre sculptures. Derek Jarman's Garden will appeal to all those who are themselves practicing gardeners, as well as any who would aspire to become gardeners -- not matter where they live, or under what conditions, or with whatever resource limitations they may be faced with. -- Midwest Book Review

GreatBookPrices.com is your top source for finding new books at the absolute lowest prices, guaranteed ! We offer big discounts - everyday - on millions of titles in virtually any category, from Architecture to Zoology -- and everything in between. Discover great deals and super-savings, on professional books, text book titles, the newest computer guides, or your favorite fiction authors. You'll find it all - at HUGE SAVINGS - at GreatBookPrices. Browse through our complete online product catalog today. Serving customers around the world for years, we help thousands find just the books they're looking for -- at incredibly low, bargain prices.


Our warehouses across the globe are fully operational without substantial delays. We are working hard and continue to overcome the daily challenges presented by COVID-19. There have been reports that delivery carriers are experiencing large delays resulting in longer than normal deliveries to customers. See USPS's website for further detail. We would like to apologize in advance if your item arrives later than the expected delivery due date.