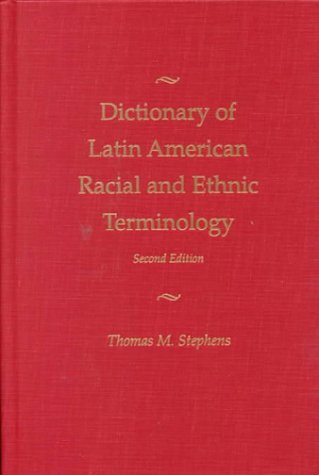 Praise for the first edition of Dictionary of Latin American Racial and Ethnic Terminology:

"Essential for any library that has Hispanic patrons or users who read or listen to even a smattering of Spanish: in today’s multicultural environment, almost every academic library should own this book."--Choice

"A major contribution to the understanding of historical and contemporary concepts of race and ethnicity in Latin America and, to a certain extent, in the United States."--Ethnic Studies

"The most thorough and trustworthy lexicon of Ibero-American ethnic descriptors ever published. It will serve many a scholar as the point of departure for primary-source fieldwork in one of the most fascinating semantic fields of Western-Hemisphere Spanish and Portuguese."--Language

"For the first time, a detailed etymology of Spanish and Portuguese words used for racial and ethnic purposes in Latin America. . . . Cites sources for word usage and, where possible, provides the context in which the word is used. An invaluable reference work for researchers in race and ethnicity."--Library Journal

This thoroughly revised and updated version of Thomas M. Stephens’s popular and respected dictionary now features terms of the French American and American French Creole Caribbean. In addition, it introduces new symbols and abbreviations and cross-references more terms between and among Spanish, Portuguese, and French than in the first edition.
Stephens also has combined some terms whose only difference was a matter of spelling, intercalated the definitions for terms he has re-alphabetized, and updated definitions. Without altering his earlier book’s successful form and style, Stephens here has radically augmented the content of a classic reference work.

Thomas M. Stephens, associate professor of Spanish and Portuguese at Rutgers University, is the author of Dictionary of Latin American Racial and Ethnic Terminology (UPF, 1990)and has published various articles on language and ethnicity.

Book Description University Press of Florida, 1999. Condition: Good. A+ Customer service! Satisfaction Guaranteed! Book is in Used-Good condition. Pages and cover are clean and intact. Used items may not include supplementary materials such as CDs or access codes. May show signs of minor shelf wear and contain limited notes and highlighting. Seller Inventory # 081301705X-2-4

Book Description University Press of Florida. Hardcover. Condition: Fair. 081301705X A great value based option. May have used stickers. May show moderate to heavy wear or use. Highlighting/Underlining/Margin Notes may be present. Does Not include codes, CDs/DVDs, or other supplementals. All pages present and legible.Former Library book. Seller Inventory # Z081301705XZ4