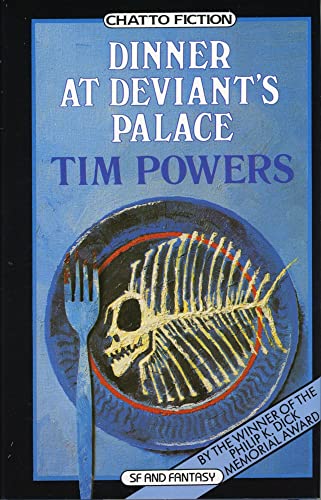 294 pp. a fine copy the uncorrected proof in wrappers of the First English and first hardcover. Bookseller Inventory # 20392

From Publishers Weekly: First published in 1985, this legendary and still distinctive novel may attract new fans, although the postnuclear-war theme has become somewhat dated. Technology has vanished in a barbaric, 22nd-century California run by a Sidney Greenstreet lookalike messiah, Norton Jaybush, who boasts a fancifully colossal "night club of the damned" in Venice and his own Holy City in Irvine. His young hippie followers, aka "Jaybirds," drift in a hallucinatory Philip K. Dick-style dream, while "redeemers" strive to rescue them. The serviceable plot focuses largely on the efforts of the hero, Gregorio Rivas, a musician and former redeemer who lives in "Ellay," to bring back a runaway. The film Mad Max (1980) seems to have inspired many of the images in this rundown world, such as "an old but painstakingly polished Chevrolet body mounted on a flat wooden wagon drawn by two horses." Powers has a nice knack for puns, e.g., a "hemogoblin," a balloonlike monster who sucks blood from its victims, and "fifths," paper money issued by a "Distiller of the Treasury." The antireligious tone of the book, not uncommon in science fiction of the era, is a refreshing change from much of today's blatantly proselytizing SF (see feature, "Other Worlds, Suffused with Religion," Apr. 16). At times Powers's heavy prose style can be trying, but his engaging conceptions will keep most readers turning the pages.

Book Description Chatto & Windus, 1986. Hardcover. Condition: As New. Dust Jacket Condition: As New. 1st Edition. An as new and unread copy SIGNED by Powers. A sketch by Powers titled "Rivas bewildered by dinner" is on the left page facing the title page. Pages have the common tanning. All jackets in mylar wraps. DG. Signed by Author(s). Seller Inventory # 005241

Book Description Chatto & Windus, 1985. Hardcover. Condition: Very Good. 1st Edition. The author's post-apocalyptic vision of Los Angeles as it existed in the late 1960's, early 70's only a hundred fold worse after nuclear devastation, culminating in the Deviant's Palace Night Club. LA was a very creepy & seamy place back then! SIGNED by the author with a full-page inscription and drawing to his friend, Phil Garland.: Garland was the proprietor of the 'Folly Press' in Tacoma, WA., who published the folly - "A Short Poem" - Ho-Ho-Ho. See, Berlyne, pg. 158. Philip K. Dick Memorial Award Winner. Wonderful association copy!. Signed by Author(s). Seller Inventory # 282