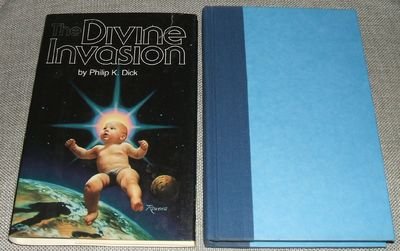 Synopsis: Exiled for 2,000 years God must retake the Earth from the clutches of his nemesis using a man caught between life and death as His vessel. God is in exile. The only man who can help is clinically dead. Herb Asher, an audio engineer by trade, is in suspended animation following a car accident that appears to have taken his life. As he floats in cryonic suspension he awaits his new spleen and dreams back through the last six years of his life which reveal much of his bizarre journey and the battle with Belial, the force of evil that will stop at nothing to achieve its goal.

From the Back Cover: God is not dead, he has merely been exiled to an extraterrestrial planet. And it is on this planet that God meets Herb Asher and convinces him to help retake Earth from the demonic Belial. Featuring virtual reality, parallel worlds, and interstellar travel, The Divine Invasion blends philosophy and adventure in a way few authors can achieve.
As the middle novel of Dick s VALIS trilogy, "The Divine Invasion" plays a pivotal role in answering the questions raised by the first novel, expanding that world while exploring just how much anyone can really know even God himself.
Over a career that spanned three decades, Philip K. Dick (1928 1982) wrote 121 short stories and 45 novels, establishing himself as one of the most visionary authors of the twentieth century. His work is included in the Library of America and has been translated into more than twenty-five languages. Eleven works have been adapted to film, including "Blade Runner" (based on "Do Androids Dream of Electric Sheep?"), Total Recall, "Minority Report," and "A Scanner Darkly."
"

Book Description Timescape Books : distributed by Simon and Schuster, 1981. Condition: Good. First Edition. Former Library book. Shows some signs of wear, and may have some markings on the inside. Seller Inventory # GRP9097293

Book Description Timescape Books : distributed by Simon and Schuster. Hardcover. Condition: GOOD. Spine creases, wear to binding and pages from reading. May contain limited notes, underlining or highlighting that does affect the text. Possible ex library copy, thatâ ll have the markings and stickers associated from the library. Accessories such as CD, codes, toys, may not be included. Seller Inventory # 2973809076

Book Description Timescape Books : distributed by Simon and Schuster, 1981. Condition: Good. A+ Customer service! Satisfaction Guaranteed! Book is in Used-Good condition. Pages and cover are clean and intact. Used items may not include supplementary materials such as CDs or access codes. May show signs of minor shelf wear and contain limited notes and highlighting. Seller Inventory # 0671417762-2-4

There are 22 more copies of this book