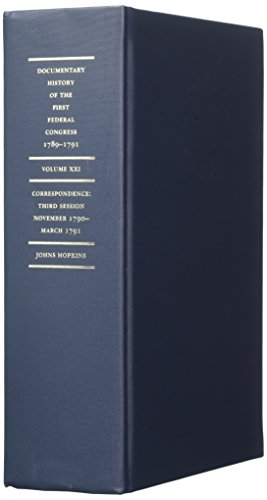 With the publication of volumes 21 and 22, Johns Hopkins University Press completes the Documentary History of the First Federal Congress, 1789–1791, a comprehensive edition that presents the official records (volumes 1–8) and the unofficially reported debates (volumes 9–14) of this essential congress, as well as eight volumes of correspondence. These letters and other documents bring the official record to life, illustrating the often informal political negotiations of a young nation’s earliest leaders and revealing the world they lived in.

Volume 21 begins with a section describing the move to Philadelphia’s Congress Hall. Third Session correspondence, arranged chronologically from November 1790 to March 1791, when Congress officially concluded its business, follows. Several key and potentially divisive issues―including a national bank, a tax on domestically produced spirits, and the final location of the permanent seat of the federal government―occupied the time and attention of Congress during this short session. In addition, reports of a successful attack on US troops by Native Americans in the Northwest Territory were the impetus for moves to increase the size of the military while continuing to negotiate with the Indian nations.

Volume 22 is unique among the correspondence volumes in that it is topical. It begins with a section of firsthand accounts about Congress that were written after it adjourned, some as late as the 1840s. This is followed by sections of documents relating to the 1790 Treaty of New York with the Creek Nation and its aftermath, as well as the experience of FFC incumbents during the second federal election. The final section includes letters and other documents dated 1789 to 1791 that the editors discovered after the publication of the volume in which they would have otherwise appeared. The documents gathered here include selections from a book of poems by Representatives Thomas Tudor Tucker and John Page, and Page’s wife, Margaret Lowther, as well as listings from the New York Society Library’s ledger that recorded book loans to members in 1789 and 1790, when Congress met in New York City’s Federal Hall. The final volume concludes with an extensive editorial apparatus, including the biographical gazetteer and index for the two-volume set. This extensive index continues the editors’ policy of indexing all concepts to provide intellectual access.

Book Description Johns Hopkins University Press, 2017. Condition: Good. A+ Customer service! Satisfaction Guaranteed! Book is in Used-Good condition. Pages and cover are clean and intact. Used items may not include supplementary materials such as CDs or access codes. May show signs of minor shelf wear and contain limited notes and highlighting. Seller Inventory # 1421416069-2-4

Book Description Johns Hopkins University Press, 2017. Hardcover. Condition: GOOD. Has little wear to the cover and pages. Contains some markings such as highlighting and writing. Supplemental materials are not guaranteed with any used book purchases. Seller Inventory # 1421416069_abe_gd

Book Description Johns Hopkins Univ Pr 2017-04-26, 2017. Hardcover. Condition: Good. Item is in good condition. Some moderate creases and wear. This item may not come with CDs or additional parts including access codes for textbooks. Might be an ex-library copy and contain writing/highlighting. Seller Inventory # DS-1421416069-3

Book Description Johns Hopkins University Press, 2017. Condition: Good. Shows some signs of wear, and may have some markings on the inside. Seller Inventory # GRP106565053

Book Description Johns Hopkins University Press, 2017. Hardcover. Condition: VERY GOOD. Pages are intact and are not marred by notes or highlighting, but may contain a neat previous owner name. The spine remains undamaged. Supplemental materials are not guaranteed with any used book purchases. Seller Inventory # 1421416069_abe_vg