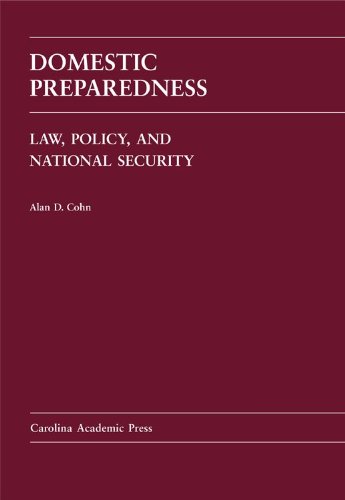 The casebook uses a traditional approach, presenting primary legal authorities--the U.S. Constitution, statutes, case law, executive orders, and presidential directives--along with policies and doctrinal publications, juxtaposed with notes and questions. Each chapter of the text focuses on a major domestic preparedness challenge: How did national emergency management strategy, policy, and doctrine evolve to its current form? How does the U.S. Constitution allocate roles and responsibilities between the federal government and the states, and how well does that align with public perception of roles and responsibilities? What are the federal government's powers and authorities? How are these powers and authorities made operational? How does the federal government ensure national preparedness? What is the proper role of the military in domestic preparedness and major incident response, and do current legal authorities support that role? What specific authorities apply to national security emergency preparedness? What mechanisms exist--public and private--to ensure private sector preparedness and response? The goal of the casebook is to teach both the law and the operational practicality of domestic preparedness.

About the Author: Alan D. Cohn is an Adjunct Professor of Law at Georgetown University Law Center and Deputy Assistant Secretary for Policy, U.S. Department of Homeland Security.

Book Description Carolina Academic Press, 2012. Hardcover. Condition: Good. Item may show signs of shelf wear. Pages may include limited notes and highlighting. May include supplemental or companion materials if applicable. Access codes may or may not work. Connecting readers since 1972. Customer service is our top priority. Seller Inventory # mon0002009435

Book Description Carolina Academic Press, 2012. Condition: Good. A+ Customer service! Satisfaction Guaranteed! Book is in Used-Good condition. Pages and cover are clean and intact. Used items may not include supplementary materials such as CDs or access codes. May show signs of minor shelf wear and contain limited notes and highlighting. Seller Inventory # 1611630819-2-4

Book Description Carolina Academic Press, 2012. Hardcover. Condition: GOOD. Has little wear to the cover and pages. Contains some markings such as highlighting and writing. Supplemental materials are not guaranteed with any used book purchases. Seller Inventory # 1611630819_abe_gd