Items related to Down These Mean Streets 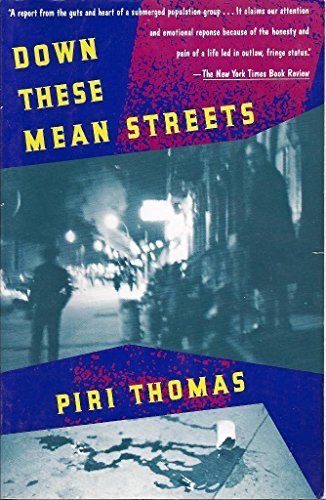 Down These Mean Streets

Title: Down These Mean Streets

"A linguistic event. Gutter language, Spanish imagery and personal poetics . . . mingle into a kind of individual statement that has very much its own sound."
--The New York Times Book Review

Thirty years ago Piri Thomas made literary history with this lacerating, lyrical memoir of his coming of age on the streets of Spanish Harlem. Here was the testament of a born outsider: a Puerto Rican in English-speaking America; a dark-skinned morenito in a family that refused to acknowledge its African blood. Here was an unsparing document of Thomas's plunge into the deadly consolations of drugs, street fighting, and armed robbery--a descent that ended when the twenty-two-year-old Piri was sent to prison for shooting a cop.

As he recounts the journey that took him from adolescence in El Barrio to a lock-up in Sing Sing to the freedom that comes of self-acceptance, faith, and inner confidence, Piri Thomas gives us a book that is as exultant as it is harrowing and whose every page bears the irrepressible rhythm of its author's voice. Thirty years after its first appearance, this classic of manhood, marginalization, survival, and transcendence is available in an anniversary edition with a new Introduction by the author.

The 30th anniversary edition of this classic memoir about growing up in Spanish Harlem includes an afterword reminding us that its streets are even meaner now, thanks to crack cocaine and the dismantling of government poverty programs. As a dark-skinned Puerto Rican, born in 1928, Piri Thomas faced with painful immediacy the absurd contradictions of America's racial attitudes (among people of all colors) in a time of wrenching social change. Three decades have not dimmed the luster of his jazzy prose, rich in Hispanic rhythms and beat-generation slang.