Home William Bayer The Dream of the Broken Horses 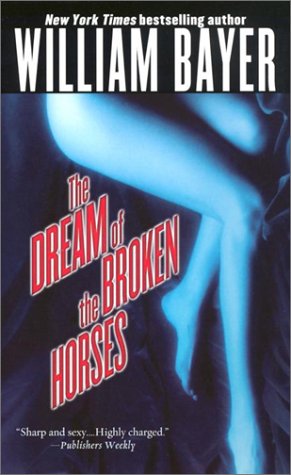 The Dream of the Broken Horses

Synopsis: Twenty-five years after the unsolved murders of Barbara Fulraine, a wealthy socialite, and her young lover, forensic sketch artist David Weiss returns to his hometown to cover a routine murder trial and becomes obsessed with trying to reconstruct the face of the killer from the earlier case. Reprint.

Review: Penzler Pick, March 2002: Among William Bayer's remarkable novels, many involve the sense of sight--the way in which we see things. Under the pseudonym David Hunt, for example, he wrote The Magician's Tale and Trick of Light, both of which feature a colorblind photographer. Now again using his own name, Bayer delves once more into the realm of the senses.

David Weiss, like his creator, is a talented courtroom sketch artist. David has returned to his hometown in the Midwest to cover the trial of a performance artist accused of killing her rock-star lover. The national media are there and soon David becomes involved with the female reporter for CNN. As fascinated as he is with the trial and with his new romance, it is an earlier murder in this town that he obsesses about. When David was a boy, the socialite mother of one of his school friends was gunned down in a motel room with her lover. Barbara Fulraine already had known tragedy when her daughter was abducted and murdered several years before. In addition, the young lover gunned down with her was David's tennis teacher. It is the stuff of young boys' fantasies.

But David has an even closer connection: His father, a therapist, was treating Barbara Fulraine for her depression when she was murdered. David's father felt he could help Mrs. Fulraine if only he could unlock her recurring nightmare, a dream about broken horses. But Barbara died before he could do it and, soon afterwards, David's father committed suicide. The gunman, although glimpsed by several people, was never identified.

As an adult, David realizes that he saw all these events through an impressionable boy's eyes. Now he wants to reexamine that case through his adult eyes and discover who gunned down that couple in the motel room. Using his father's notes and taking time out from the trial to interview people who lived in the town at the time, David sketches the memories he digs up until a picture begins to emerge, a picture that may well put David's life in danger if the murderer is still living in the town.

Bayer's talent as a writer and a storyteller is extraordinary. He manages to convey the media circus surrounding the current trial (which has a surprising outcome) with the quiet stillness of a story that has remained buried just beneath the surface of the town's history for many years. --Otto Penzler

1. The Dream of the Broken Horses

2. The Dream of the Broken Horses

3. The Dream of the Broken Horses

Book Description Pocket Star. Mass Market Paperback. Condition: Good. A copy that has been read, but remains in clean condition. All pages are intact, and the cover is intact. The spine may show signs of wear. Pages can include limited notes and highlighting, and the copy can include previous owner inscriptions. At ThriftBooks, our motto is: Read More, Spend Less. Seller Inventory # G0743403355I3N00

4. The Dream of the Broken Horses

5. The Dream of the Broken Horses

Book Description Pocket Star, 2002. Condition: Good. A+ Customer service! Satisfaction Guaranteed! Book is in Used-Good condition. Pages and cover are clean and intact. Used items may not include supplementary materials such as CDs or access codes. May show signs of minor shelf wear and contain limited notes and highlighting. Seller Inventory # 0743403355-2-4

6. The Dream of the Broken Horses

7. The Dream of the Broken Horses

8. THE DREAM OF THE BROKEN HORSES