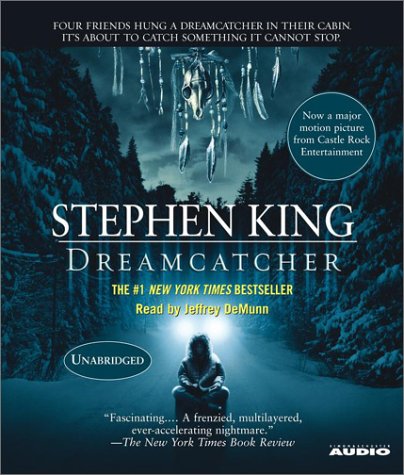 Synopsis: Once upon a time, in the haunted city of Derry, four boys stood together and did a brave thing. It was something that changed them in ways they could never begin to understand.

Twenty-five years after saving a Down's-syndrome kid from bullies, Beav, Henry, Pete, and Jonesy -- now men with separate lives and separate problems -- reunite in the woods of Maine for their annual hunting trip. But when a stranger stumbles into their camp, disoriented and mumbling something about lights in the sky, chaos erupts. Soon, the four friends are plunged into a horrifying struggle with a creature from another world where their only chance of survival is locked in their shared past -- and in the Dreamcatcher.

Review: Stephen King fans, rejoice! The bodysnatching-aliens tale Dreamcatcher is his first book in years that slakes our hunger for horror the way he used to. A throwback to It, The Stand, and The Tommyknockers, Dreamcatcher is also an interesting new wrinkle in his fiction.

Four boyhood pals in Derry, Maine, get together for a pilgrimage to their favorite deep-woods cabin, Hole in the Wall. The four have been telepathically linked since childhood, thanks to a searing experience involving a Down syndrome neighbor--a human dreamcatcher. They've all got midlife crises: clownish Beav has love problems; the intellectual shrink, Henry, is slowly succumbing to the siren song of suicide; Pete is losing a war with beer; Jonesy has had weird premonitions ever since he got hit by a car.

Then comes worse trouble: an old man named McCarthy (a nod to the star of the 1956 film Invasion of the Body Snatchers) turns up at Hole in the Wall. His body is erupting with space aliens resembling furry moray eels: their mouths open to reveal nests of hatpin-like teeth. Poor Pete tries to remove one that just bit his ankle: "Blood flew in splattery fans as Pete tried to shake it off, stippling the snow and the sawdusty tarp and the dead woman's parka. Droplets flew into the fire and hissed like fat in a hot skillet."

For all its nicely described mayhem, Dreamcatcher is mostly a psychological drama. Typically, body snatchers turn humans into zombies, but these aliens must share their host's mind, fighting for control. Jonesy is especially vulnerable to invasion, thanks to his hospital bed near-death transformation, but he's also great at messing with the alien's head. While his invading alien, Mr. Gray, is distracted by puppeteering Jonesy's body as he's driving an Arctic Cat through a Maine snowstorm, Jonesy constructs a mental warehouse along the lines of The Memory Palace of Matteo Ricci. Jonesy physically feels as if he's inside a warehouse, locked behind a door with the alien rattling the doorknob and trying to trick him into letting him in. It's creepy from the alien's view, too. As he infiltrates Jonesy, experiencing sugar buzz, endorphins, and emotions for the first time, Jonesy's influence is seeping into the alien: "A terrible thought occurred to Mr. Gray: what if it was his concepts that had no meaning?"

King renders the mental fight marvelously, and telepathy is a handy way to make cutting back and forth between the campers' various alien battlefronts crisp and cinematic. The physical naturalism of the Maine setting is matched by the psychological realism of the interior struggle. Deftly, King incorporates the real-life mental horrors of his own near-fatal accident and dramatizes the way drugs tug at your consciousness. Like the Tommyknockers, the aliens are partly symbols of King's (vanquished) cocaine and alcohol addiction. Mainly, though, they're just plain scary. Dreamcatcher is a comeback and an infusion of rich new blood into King's body of work. --Tim Appelo

Book Description Condition: Acceptable. May have some shelf-wear due to normal use. Seller Inventory # 0KVBKG00B63O