Home Robert Brustein Dumbocracy in America: Studies in the Theatre of Guilt, 1987-1994 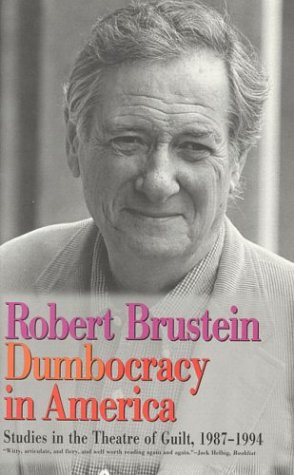 Synopsis: No theatre critic in America is more informed by ideas than Robert Brustein, and no critic does a better job of relating theatre to the larger culture. In this new collection of essays, reviews, and profiles (some of them appearing here for the first time), Mr. Brustein uses the prism of the American theatre to explore the motivating impulses behind rampant political correctness. "Art and politics belong in separate compartments," he writes. "Creative activity is almost invariably diminished when it is politicized." He laments the prevailing belief that the critical function of drama is to arouse the guilt of its audience; he abhors the efforts of multiculturalists to discredit other groups in order to validate their own existence. Ranging widely over the American cultural landscape, Mr. Brustein considers government efforts to regulate the arts; the rosy retrospectives of American radicalism; and the undue influence of the New York Times, and offers his intelligent and clear-eyed assessments of the theatre's productions and people that have been notable—and sometimes notorious—over recent years. As always, he is both a pleasure to read and a cultural education.

About the Author: Robert Brustein, theatre critic for the New Republic and is the author of Cultural Calisthenics, Reimagining American Theatre, The Theatre of Revolt, and The Siege of the Arts. He is also founder and artistic director of the American Repertory Theatre at Harvard University.

Book Description Dee Publisher, Ivan R. Paperback. Condition: Very Good. A copy that has been read, but remains in excellent condition. Pages are intact and are not marred by notes or highlighting, but may contain a neat previous owner name. The spine remains undamaged. At ThriftBooks, our motto is: Read More, Spend Less. Seller Inventory # G1566630983I4N00

Book Description Ivan R. Dee, 1995. Condition: Good. A+ Customer service! Satisfaction Guaranteed! Book is in Used-Good condition. Pages and cover are clean and intact. Used items may not include supplementary materials such as CDs or access codes. May show signs of minor shelf wear and contain limited notes and highlighting. Seller Inventory # 1566630983-2-4