Items related to MY EARS ARE BENT 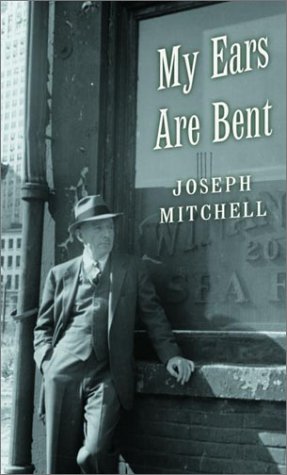 MY EARS ARE BENT

As new, unread copy of this scarce title, in as new, mylar-protected dust jacket. (This is the first revised edition (first printing) of a title originally published in 1938 and out-of-print for more than sixty years.) NF60. Bookseller Inventory # 021650

Title: MY EARS ARE BENT

In the fall of 1929 a young man from a small farming town in the swamp country of North Carolina arrived in New York City. Because of a preternatural inaptitude for mathematics, he had failed to receive a college degree from the University of North Carolina and suffered the added misfortune of arriving in the big city at the moment of the stock market crash. For the next eight years, except for a brief period when he got sick of the whole business and went to sea on a freighter to Leningrad, Joseph Mitchell worked first at The World, then as a district man at The Herald Tribune, and then as a reporter and feature writer at The World-Telegram. He covered the criminal courts, Tammany Hall politicians, major murder trials, and the Lindbergh kidnapping. He wrote multi-part profiles of notable figures of the day, among them Eleanor Roosevelt, George Bernard Shaw, and Franz Boas. His byline, appearing two or three times a day in The World-Telegram, would become familiar to almost four hundred thousand readers. But Mitchell discovered that it was not the politicians, business leaders, or noted celebrities of the day that he got the most pleasure out of interviewing, but people whose talk was “artless, the talk of the people trying to reassure or comfort themselves . . . talking to combat the loneliness everyone feels.” He began to frequent gymnasiums, speakeasies, and burlesque houses. He visited storefront churches in Harlem, covered the waterfront, and spent time at the Fulton Fish Market. Fascinated by the bizarre and the strange, he would become, in the words of Stanley Walker, his noted editor at The Herald Tribune, “one of the best newspaper reporters in the city.” In January 1938, My Ears Are Bent, a collection of Mitchell’s newspaper pieces, was published. That book, unavailable for more than sixty years, is now restored to print. A few months after the book’s original publication, Mitchell joined the staff of The New Yorker, where he remained until his death in 1996.

From the original reviews of
My Ears Are Bent

“Every Joseph Mitchell story I have ever read has been—in its own way—a work of art, a fact of which the author is doubtless perfectly unaware. . . . My Ears Are Bent is the saga of sideshow New York written by the angel of the odd or the imp of the perverse, as you prefer.”
—Clifton Fadiman, The New Yorker

“[In My Ears Are Bent] Mitchell covers several dozen new angles in the life of metropolitan New York, from freak
to human interest, from behind the lines on headline sensations to strippers, reefer smokers, the life of a bar and grill. In doing it he has a perfect talent for hitting off the human equation.”
—Otis Ferguson, The New Republic

“These stories, the tales of the people he has talked to in the course of his wanderings about New York, are done with a sharp eye for the revealing detail, and in a prose style that is casual, but tough. In his special field, that of the unpredictable and daffy, Mr. Mitchell is an expert.”
—Stanley Walker, The Herald Tribune