Items related to NO EASY DAY: The Firsthand Account of the Mission That...

Home Owen, Mark (with Kevin Maurer) NO EASY DAY: The Firsthand Account of the Mission That Killed ...
Stock Image 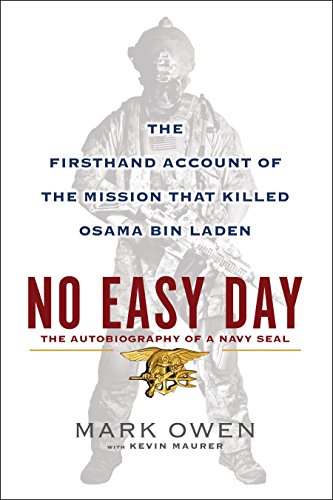 NO EASY DAY: The Firsthand Account of the Mission That Killed Osama Bin Laden

Title: NO EASY DAY: The Firsthand Account of the ...

The #1 New York Times bestselling first-person account of the planning and execution of the Bin Laden raid from a Navy SEAL who confronted the terrorist mastermind and witnessed his final moments.

From the streets of Iraq to the rescue of Captain Richard Phillips in the Indian Ocean, and from the mountaintops of Afghanistan to the third floor of Osama Bin Laden’s compound, operator Mark Owen of the U.S. Naval Special Warfare Development Group—known as SEAL Team Six—has been a part of some of the most memorable special operations in history, as well as countless missions that never made headlines.

No Easy Day puts readers alongside Owen and his fellow SEAL team members as they train for the biggest mission of their lives. The blow-by-blow narrative of the assault, beginning with the helicopter crash that could have ended Owen’s life straight through to the radio call confirming Bin Laden’s death, is an essential piece of modern history.

In No Easy Day, Owen also takes readers into the War on Terror and details the formation of the most elite units in the military. Owen’s story draws on his youth in Alaska and describes the SEALs’ quest to challenge themselves at the highest levels of physical and mental endurance. With boots-on-the-ground detail, Owen describes several missions that illustrate the life and work of a SEAL and the evolution of the team after the events of September 11.

In telling the true story of the SEALs whose talents, skills, experiences, and exceptional sacrifices led to one of the greatest victories in the War on Terror, Mark Owen honors the men who risk everything for our country, and he leaves readers with a deep understanding of the warriors who keep America safe.

Mark Owen a former member of the U.S. Naval Special Warfare Development Group, commonly known as SEAL Team Six. In his many years as a Navy SEAL, he has participated in hundreds of missions around the globe, including the rescue of Captain Richard Phillips in the Indian Ocean in 2009. Owen was a team leader on Operation Neptune Spear in Abbottabad, Pakistan, on May 1, 2011, which resulted in the death of Osama bin Laden. Owen was one of the first men through the door on the third floor of the terrorist mastermind’s hideout, where he witnessed Bin Laden’s death. Mark Owen’s name and the names of the other SEALs mentioned in No Easy Day have been changed for their security.