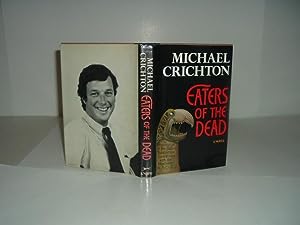 EATERS OF THE DEAD By MICHAEL CRICHTON 1976 First Edition

TITLE: EATERS OF THE DEAD By MICHAEL CRICHTON 1976 First Edition AUTHOR: MICHAEL CRICHTON PUBLISHER - (LOCATION) / COPYRIGHT: ALFRED A. KNOPF, NY 1976 EDITION: First Edition stated ISBN: 0394494008 CATEGORY: Mystery, First Edition, Rare BINDING/COVER: Hardback with dust jacket COLOR: Light Brown SIZE: 5 ½ x 8 ½ (approximately) PAGES: 193 pages. CONDITION: The dust jacket is in good condition; there a vertical crease line running the span of the back flap; the original price of $6.95 is still on the front flap. Book is without marks or writings, pages are clean and book is tight and sturdy. All the pages are present in book. Good+/Good+ dust jacket condition. BACKGROUND/DESCRIPTION: The Manuscript of Ibn Fadlan, Relating His Experiences with the Northmen in A.D. 922 COMPETITIVE PRICING! Once paid, book(s) will ship immediately to customer (it's on the way), you are welcome to email about shipment date! We offer free gift wrapping year round on all our products regardless of item's cost. REFUNDS: All ViewFair books, prints, and manuscript items are 100% refundable up to 14 days after item is received. InvCodePrc E H V VIEWFAIR BOOKS: RSTC 008387 We support FRIENDS OF THE LIBRARY nationwide with donations and purchases. Bookseller Inventory # 008387

It is 922 A.D. The refined Arab courtier Ibn Fadlan is accompanying a party of Viking warriors back to the north. Fadlan belatedly discovers that his job is to combat the terrors in the night that come to slaughter the Vikings--but just how he will do it, Fadlan has no idea....
From the Trade Paperback edition.

Michael Crichton takes the listener on a one-thousand-year-old journey in his adventure novel Eaters Of The Dead. This remarkable true story originated from actual journal entries of an Arab man who traveled with a group of Vikings throughout northern Europe. In 922 A.D, Ibn Fadlan, a devout Muslim, left his home in Baghdad on a mission to the King of Saqaliba. During his journey, he meets various groups of "barbarians" who have poor hygiene and gorge themselves on food, alcohol and sex. For Fadlan, his new traveling companions are a far stretch from society in the sophisticated "City of Peace." The conservative and slightly critical man describes the Vikings as "tall as palm trees with florid and ruddy complexions." Fadlan is astonished by their lustful aggression and their apathy towards death. He witnesses everything from group orgies to violent funeral ceremonies. Despite the language and cultural barriers, Ibn Fadlan is welcomed into the clan. The leader of the group, Buliwyf (who can communicate in Latin) takes Fadlan under his wing.

Without warning, the chieftain is ordered to haul his warriors back to Scandinavia to save his people from the "monsters of the mist." Ibn Fadlan follows the clan and must rise to the occasion in the battle of his life. The unabridged story is read by actor Victor Garber (Titanic; The First Wives Club), who brings life and a personality to the plot--convincingly portraying each character with appropriate accents. Crichton also sets the stage in the beginning and chimes in every so often to clarify historical places and events. If you love historical action thrillers, but are short on time, this audio book packs an epic journey into a three hour adventure. --Gina Kaysen (Running time: 3 Hours; 2 cassettes)


We guarantee the condition of every book as it's described on the Abebooks web sites. If you're dissatisfied with your purchase (Incorrect Book/Not as Described/Damaged) or if the order hasn't arrived, you're eligible for a refund within 14 days of the estimated delivery date. If you've changed your mind about a book that you've ordered, please use the Ask bookseller a question link to contact us and we'll respond within 2 business days.