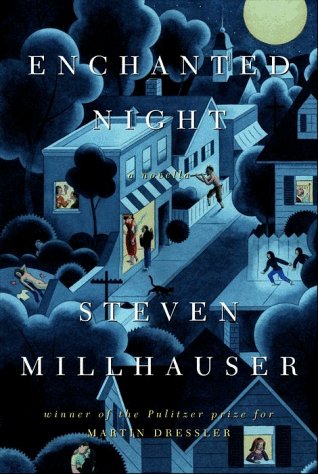 From the Pulitzer Prize-winning author of MARTIN DRESSLER comes a stunningly original new book set in a Connecticut town over one incredible summer night. The delicious cast of characters includes a band of teenage girls who break into homes and simply leave notes reading "We Are Your Daughters," a young woman who meets a phantom lover on the tree swing in her back yard, a beautiful mannequin who steps down from her department store window, and all the dolls "no longer believed in," left abandoned in the attic, who magically come to life. With each new book, Steven Millhauser radically stretches not only the limits of fiction but also of his seemingly limitless abilities.ENCHANTED NIGHT is a remarkable piece of fiction, a compact tale of loneliness and desire that is as hypnotic and rich as the language Millhauser uses to weave it. Millhauser is also the author of IN THE PENNY ARCADE, THE BARNUM MUSEUM, and DANGEROUS LAUGHTER, among others. Mint, new, unread, first edition, first printing, in as new, mylar-protected dust jacket. {Not remainder-mared or price-clipped} BUND. Bookseller Inventory # 023402

Pulitzer Prize-winning novelist Steven Millhauser returns with a magical novella imbued with the transforming power of the (almost) full moon.

"A hot summer night in southern Connecticut, tide going out and the moon still rising. Laura Engstrom, fourteen years old, sits up in bed and throws the covers off."

Others, too, are awakened by a chorus of night voices: Haverstraw, a thirty-nine-year-old failed writer living in his mother's attic; an old woman who lives alone; three teenage boys looking for trouble; a gang of girls who roam the night and break into houses; a lonely young man looking for love; a beautiful mannequin whose cold fiberglass arms begin to quicken; a group of restless children; and assorted dolls, toys, and animals long forgotten in an attic.

Only Steven Millhauser could transform our childhood legends of the night into a hypnotic adult tale of passionate enchantment, encounters of darkness and illumination, human passions and inhuman awakenings. Read it by the light of the moon.

In novels such as Edwin Mullhouse and the Pulitzer Prize-winning Martin Dressler, Steven Millhauser conjured fictions as intricate and delicately formed as soap bubbles. True to form, his Enchanted Night seems to want to float right up out of the reader's hand. In its pages are many of Millhauser's trademark fascinations: dolls; mannequins; an obsessed artist; teenage girls meeting secretly at night; and above all, the strangeness lurking just under the surface of everyday life. Set entirely over the course of one night, Enchanted Night follows the denizens of a Connecticut town as they rise from their beds under the light of a brilliant, almost-full moon. Fourteen-year-old Laura Engstrom wakes to a restlessness so fierce that "if she doesn't do something right away, this second, she'll scream." Middle-aged Haverstraw (who still lives with his mother) writes for hours in the attic, then leaves to wander the streets. Janet Manning trysts with a lover in her yard, and a band of teenage girls breaks into houses only to leave behind the cryptic message "WE ARE YOUR DAUGHTERS." Meanwhile, more magical events are afoot. "This is the night of revelation. This is the night the dolls wake. This is the night of the dreamer in the attic. This is the night of the piper in the woods," a chorus of night voices tells us--and a mannequin begins to stir behind a store window, while all over town, abandoned dolls and stuffed animals come slowly to life.

So far, so good. But somewhere along the way, the fairy dust gets a little thick. Is it the chapter in which the moon goddess ravishes virginal Danny? ("Now she strokes the skin of the sleeping one, now she kisses his eyelids closed in dream, now she stiffens his love-lance with her hand.") Or perhaps the appearance of Pan, "a moon-dancer, a flute-dreamer" making music for the town's children? How about the "Song of the One-Eyed Cuddly Bear" chapter, which reads, in its entirety, "I wuv woo. Does woo wuv me?" The only real danger posed in this wispy novella--"the man with shiny black hair" who stalks Laura in order to add her to his "gallery"--is not actually a threat, we're assured. Millhauser even reduces his bold girl outlaws, with their "pleasure in violation," to sipping midnight lemonade with their victim. And what, really, is magic without danger? Decoration, mostly, though there's nothing particularly wrong with that--just nothing particularly urgent either. None of which is to say that there aren't moments of startling beauty in Enchanted Night. There is no stylist more graceful than Millhauser at his best, and here he writes movingly about the formless yearnings of adolescence and the mortal sweetness of sex. Yet even the prose can't quite animate his novella. In the end, Enchanted Night is a rarefied aesthetic experience that asks for very little back. --Mary Park