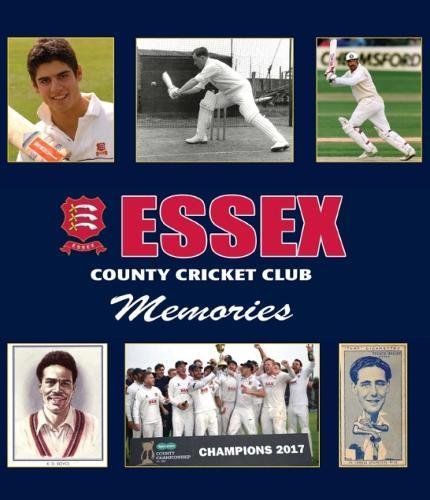 A superb, lavishly illustrated, full colour, 372-page hardback book in which players past and present, club members and other supporters share their unique memories of playing and watching this famous county cricket club founded in 1876. In this veritable feast of nostalgia, they turn back the clock to recall the key moments, matches, batsmen, bowlers, wicketkeepers, all-rounders, fielders and overseas stars who helped make this such a special, friendly club. Spearheading the 25 players exclusively interviewed are legendary former England record-breaking batsman Graham Gooch (who also contributes the foreword), current England Test opener Alastair Cook, respected title-winning skipper Keith Fletcher, stylish South African batsman Ken McEwan, Nasser Hussain (now a Sky Sports co-commentator) and popular members from the trophy-winning seasons of the late 70s, 80s and early 90s, John Lever, Stuart Turner, Ray East, David Acfield, Neil Foster, Brian Hardie, Mark Ilott, Ronnie Irani, Derek Pringle, Paul Prichard and John Childs. Recently retired Graham Napier, David Masters and Ashley Cowan also recall their highs and lows. Old stalwarts Robin Hobbs, the former England leg-spinner, Geoff Smith and Graham Saville evoke the bygone days of the pre-white ball era. As well as the thoughts of 'Cookie', read the views of current heroes Ravi Bopara, Ryan ten Doeschate and James Foster, fresh from their back-to-back triumphs as second and first division County Championship winners in 2016 and 2017 respectively. But this mammoth volume is as much about the die-hard supporters as it is the players who have worn the three seaxes with flair, pride and distinction. More than 100 have contributed their personal memories and anecdotes from following their team at Chelmsford, Colchester, Southend, Ilford, Brentwood, Romford, Clacton and the original County Ground at Leyton. Indeed, there is a section devoted to all 14 of the various festival outgrounds, plus the beloved mobile scoreboard (and the men who operated it) that trundled from place to place.