Items related to THE EXCEPTION TO THE RULERS: Exposing Oily Politicians,... 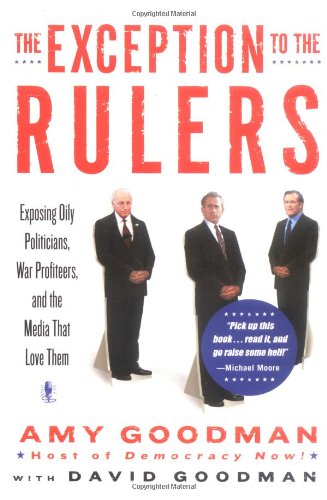 THE EXCEPTION TO THE RULERS: Exposing Oily Politicians, War Profiteers, and the Media That Love Them

Title: THE EXCEPTION TO THE RULERS: Exposing Oily ...

Her comments turned Charlie Rose red in the face. Bill Clinton called her 'hostile, combative, and even disrespectful.' Newt Gingrich said to her, 'You're the kind of reporter I warned my mother about.' Meet Amy Goodman, award-winning journalist and host of the daily hour-long talk show that is a beacon for passionate, critical, and hard-hitting news. On subjects ranging from the deceptions of the George H. W. Bush administration to the corruption of media monopolies and corporate influence over the government, Amy Goodman attacks and exposes the lies and hypocrisy that put democracy at risk. Goodman has traveled the world reporting and speaking out in defense of human rights and offers no apologies for her advocacy. At lectures, rallies, and other public appearances, thousands turn out to hear her speak the truth. Now, in her first book, she offers her no-holds-barred perspective on world events.

Amy Goodman is an internationally acclaimed journalist and a media phenomenon who has received several top journalism awards. In addition to hosting her daily radio show, Goodman speaks on the topic of media activism to audiences nationwide -- on university campuses and before human rights, church, and community groups. She lives in New York City. David Goodman is an independent journalist and author, most recently of the critically acclaimed Fault Lines: Journeys in the New South Africa. He lives with his wife and two children in Vermont.