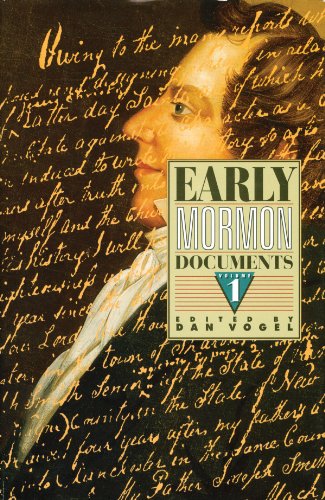 Synopsis:
As historians continue to sort through the beginnings of Mormonism, Dan Vogel’s comprehensive inventory of all relevant primary documents is an unparalleled achievement. In this first of a multi-volume series, Joseph Smith’s family–Emma, Katharine, Lucy, Joseph Sr., William, and others–recount how they became convinced of his high calling, feeling “the spirit of God like a burning fire shut up in [their] bones.” These narratives are carefully presented in their original forms with full documentation and annotation.

As confidantes, the Smith family were intimately acquainted with their son’s and brother’s extraordinary supernatural encounters. Their narratives form an Urgeschichte that they repeated with considerable consistency over the years, despite the fact that Joseph’s published autobiography, which became the accepted, canonized version, differs significantly in several areas.

According to family tradition, the young seer retired to his bedroom one evening after discussing the Bible with his parents and siblings. In a night vision he saw an angelic messenger who told him that his sins were forgiven and that he would uncover an ancient record buried near their home. The next day, working in the fields alongside his older brother, he fainted from lack of sleep and again saw the messenger who commanded him to go and retrieve the sacred record.

He found the book, which was inscribed in an unknown script on gold leaves, hidden in a stone box with a pair of eye-glasses, the lenses of which were made of diamonds the size of “an English crown only slightly thicker.” By looking through the glasses, then at an opaque seer stone placed in a hat, the book’s script appeared as illuminated English words. He published his translation as the Book of Mormon. Later, in a friend’s bedroom, Joseph was impressed to ordain elders and to organize a new church. Almost immediately his followers performed miracles, beginning with a dramatic levitation and exorcism which inaugurated the restoration of primitive Christianity.

From the Publisher: The first of a five volume series.

Book Description Signature Books, 1996. Condition: Good. A+ Customer service! Satisfaction Guaranteed! Book is in Used-Good condition. Pages and cover are clean and intact. Used items may not include supplementary materials such as CDs or access codes. May show signs of minor shelf wear and contain limited notes and highlighting. Seller Inventory # 1560850728-2-4