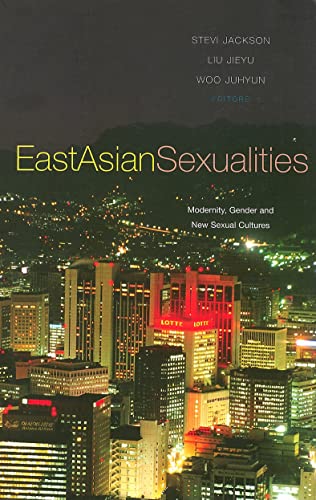 This book paints a vivid picture of women's active involvement in reshaping intimate and public sexual life in East Asia. In bringing together exciting new feminist research on sexuality from East Asia and making it available to a wider audience, East Asian Sexualities unsettles stereotypes, rectifies lack of awareness and demonstrates that East Asia matters. The chapters address the diversity and variety of everyday sexual lives and sexual politics in China, Hong Kong, Taiwan, Korea and Japan. They range from workplace sexual cultures, trans-national sexual relations, the conditions of sex-work and the emergence of new sexual desires, cultures and movements.

About the Author: Stevi Jackson is Professor of Women's Studies and Director of the Centre for Women's Studies at the University of York, UK. She works on theories of gender and sexuality and is author of a number of books including Childhood and Sexuality (1982; 1996), Heterosexuality in Question (1999) and Theorizing Sexuality, with Sue Scott (2008). She has co-edited, with Sue Scott, Feminism and Sexuality (1997) and Gender: A Sociological Reader (2001).

Liu Jieyu is Academic Fellow of the White Rose East Asian Centre based at the University of Leeds, having previously been Lecturer in Sociology at the University of Glasgow. She is the author of Gender and Work in Urban China: Women Workers of the Unlucky Generation (2007) and of journal articles on women workers in China.

Woo Juhyun has completed a PhD at the University of York on narratives of sexual citizenship and is pursuing further research on narratives of sexuality at the University of York. She undertook her undergraduate and graduate education in the UK, but was born and raised in Korea and worked as a sociological researcher in her native country before returning to the UK to work on her PhD.

Book Description Zed Books, Limited. Paperback. Condition: Very Good. A copy that has been read, but remains in excellent condition. Pages are intact and are not marred by notes or highlighting, but may contain a neat previous owner name. The spine remains undamaged. At ThriftBooks, our motto is: Read More, Spend Less. Seller Inventory # G1842778897I4N00

Book Description Zed Books, 2008. Condition: Good. Ships from the UK. Former Library book. Shows some signs of wear, and may have some markings on the inside. Seller Inventory # GRP106399402

Book Description Zed Books, 2008. Condition: Good. A+ Customer service! Satisfaction Guaranteed! Book is in Used-Good condition. Pages and cover are clean and intact. Used items may not include supplementary materials such as CDs or access codes. May show signs of minor shelf wear and contain limited notes and highlighting. Seller Inventory # 1842778897-2-4